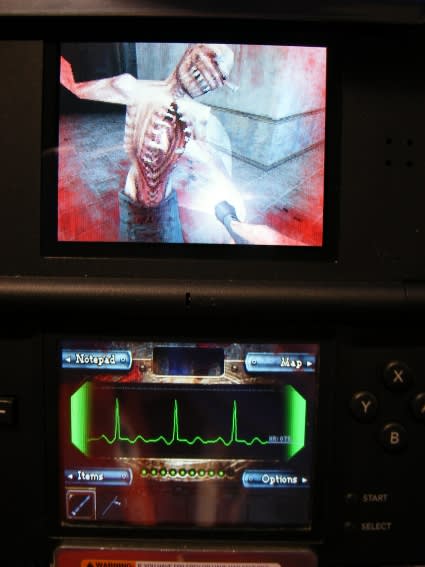 Tiny DS demo stations around Gamecock's Fury booth had demos of Dementium: The Ward available, and I made it a point to try Renegade Kid's horror FPS. The graphics may be simple in terms of polygons, but the game does its best to set a mood, which can be difficult on a handheld!

I was immediately impressed with the framerate. I'm not a frame-counting expert, but the game ran perfectly steadily at what looked like 60 FPS. The simple geometry of the game's environments and enemies is masked by the lighting effects (you can really only see about five feet in front of you without a flashlight) and a dirtying effect around the periphery of the screen, which is normally black but turns red when you take a hit. These work similarly to the noise and fog effects in Silent Hill to create a mood while hiding technical limitations. Taking inspiration from Silent Hill is generally smart, and this isn't the only example of such influence.


The demo begins in a hospital room. I looked around (with the stylus) and found a paper on the floor, picking it up with an icon on the touch screen. It was a four-page notebook, on which I could write any notes I needed to. I exited the room and found a trail of blood, which eventually led to a giant knife-wielding monster dragging a body through some doors, which locked. The monster was much bigger and thicker than Pyramid Head, more resembling the Batman: The Animated Series version of Clayface, but the huge knife gave the influence away.

As I explored the hospital, I found a flashlight and a nightstick, both of which are accessed via icon and operated with the L button. The controls worked just fine-- I never felt like I was fighting with them, and they're quite responsive.

Writing down notes in adventure-style games is going to be the Big Thing in DS games, with Zelda and Dementium here both taking part. The mechanic makes such perfect sense for adventure games, which this felt like more than an FPS. I found a number written in blood on a wall, and, figuring it to be important, wrote it down. It turned out to be the combination to a lock I happened upon later. Allowing you to write down anything removes the necessity for clues to be clearly marked as clues, since you don't need the game to "trigger" a notebook entry or make you push a button to read the clue. It turns out to be a pretty significant development for adventure games.

Eventually, I came upon a zombie of some kind, with a big gaping mouth/wound/scary thing in his torso. The enemies don't look as good as the environments, and the zombie's method of attack is very House of the Dead: he just runs and jumps at you. I'm sure there will be all kinds of other enemies, but these jerks were hard enough to kill with a melee weapon.

If the game has enough puzzle solving and a good enough story, this handheld FPS could be a surprise winner. I found no technical reason for it to be anything else, and what I played did a great job of drawing me in.

In this article: dementium, fps, gamecock, pax07, renegadekid
All products recommended by Engadget are selected by our editorial team, independent of our parent company. Some of our stories include affiliate links. If you buy something through one of these links, we may earn an affiliate commission.
Share
Tweet
Share