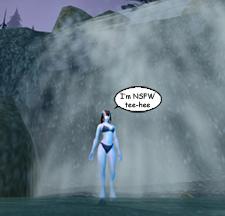 Quick turn out the lights, shut your door, and unplug the phone... today we're going to talk about boobs. shh shh shh, I know, please keep it down, don't get all worked up, it's really not anything to worry about. I'm not actually going to show you any boobs, just talk about them, or rather about morality, censorship and the like in our favourite type of video games. As I'm sure you're all aware, as informed gaming news readers, you've read the latest load of tripe about our beloved "sex-boxes" and how they are filling us full of sodomisingly good times. Well, I decided to take a look at MMOs under the same plate, but before you fill the comments section with slander, and my inbox with hate, let me just say I think the fellow who wrote the article is a grade-A ass, but he did make me think about a few things.

First off, let's look at the ESRB rating that comes on most of our MMO titles, generally they are rated T (for teen!) but have the wonderful disclaimer of "experience may change during online play". Now frankly that's pretty much a carte blanche to do whatever they like, because if they get pulled into court they can just grab their Objection! sign and point at the rating. But I think that for the most part MMO game developers take a lot of strong steps towards keeping the playing environment relatively tame. There certainly aren't any terribly un-graphic alien lesbian love scenes in Paragon City, and last I checked, even though the Mithra are cute little cat ladies, there hasn't been any rampant cases of cross-species hot loving in Vana'diel.

I think what I'm trying to get at is, that game developers do in fact keep our online experiences as puritanian as they can (violence aside of course), because they don't really see a need to change their games into online porn. Certainly there are the usual video game metrics of unrealistic body types (for both the women and the men), and the fact that somehow the more armour a female character puts on, the more like a princess leia golden bikini (link is semi-NSFW) it looks. But other than that things are generally tame, that is, until it gets into the hands of the players.

Through the my years online I have often kept myself abreast (see wat i did thar?) of as much gaming news as I can, because frankly, a lot of my time is spent playing the games, and so I like to be informed. So I have heard of a lot of different indecent acts, and strange occurrences that go on in our online worlds. But almost always, and without fail these acts are perpetrated by the players of the games and generally looked down upon by the developers. Now I'm not trying to say that the devs are all pure at heart, I just think they are taking a responsible role as developers for games that attract players of all ages.

So lets go over a few of the less than decent acts, just to get them out of the way (and because frankly, most of them are damned hilarious).

Second Life, ahh second life, with your wonderful monuments to our fallen heroes, and amazing work in honour of famous artists.. oh yeah and your giant flying penises. God knows anytime something happens that has a bit of fan fair in SL, there is going to be some nutter causing a torrential down pour of wangs (WTS [Wang] x1 PST). Now this is bound to happen in a game where just about anything goes as long as you can imagine it, and there are actual people playing it. Certainly if it were all robots this sort of thing would never happen, but anyone who has ever been to a bar, a school, on a bus or train, or walked 10 feet in any direction anywhere on the earth they have seen some budding artist's work of a penis shape scratched into/painted on/drawn on, some surface or another. And why not? The phallic spire is a pretty popular object, and in some countries they even have entire festivals, or gods dedicated to it's towering form.

Finally we have the people who develop add-ons or hacks for games so they can run around naked (link is NSFW, contains pictures of naked WoW ladies!), or see other people naked. Now these people are the least harm to anyone, but often cause the most outrage in the non-gamer community. These are people who spend their own time coding up these programs just so they can see some animated boobs, and frankly good on them. Considering how easy it is to see actual pornographic images on the internet, these people would rather get a giggle (or a wiggle) out of making a night elf rogue appear naked. However, because they often make these hacks or add-ons available to the general public, some 13 year old kid gets a hold of it, installs in, and their parents walk in to the sight of a fully bared set of female tauren udders swinging to and fro, and the next thing you know, you have a fox news exclusive entitled "To catch a cow person predator" (please take a seat over there).

Frankly I think all of the things that go on, like the stuff I mentioned above, is pretty tame. The only thing that concerns me is if a developer steps up and makes an 'adult mmo', personally it wouldn't offend me in the slightest, nor am I worried about a 14 year old boy getting a subscription to the game somehow. What worries me the most is if that 14 year old boy gets that subscription, and some media outlet finds out and has yet another attack at the video game industry, frankly I think the entire process is absolutely ludicrous, but that doesn't mean it's going to go away. Instead of raging on against violence in video games, or sex in video games, or anything of the like, I would think there would be more important things to concern ourselves with. The ESRB rating system and retailers have been getting better and better through the years, so let them do their thing, and let us adult gamers be as perverted as we want.

In this article: city-of-heroes, cox, development, ffxi, mmo, mmo-design, mmo-development, morality, nsfw, politics-in-gaming, second-life, world-of-warcraft, wow
All products recommended by Engadget are selected by our editorial team, independent of our parent company. Some of our stories include affiliate links. If you buy something through one of these links, we may earn an affiliate commission.
Share
Tweet
Share