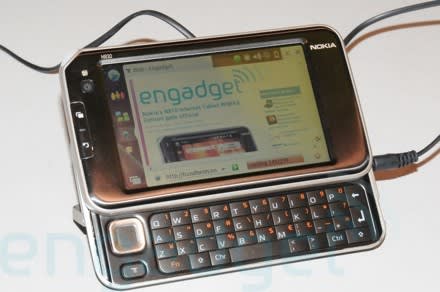 We've already seen Google's Android mobile OS get shoehorned onto Nokia N810 tablet, but it looks like the Internet Tablet OS is about to get even more flexible with ports of Ubuntu and the Qt toolkit. Nokia is acquiring Qt developer Trolltech, so it's no surprise the Qt is making the jump, but it looks like it'll be mostly a third-party-targeted framework, with the ITOS interface and bundled apps still using GTK+. Nokia told Ars Technica that it's exploring cross-platform possibilities between ITOS and Series60, and that it wants to see if GTK+ and Qt can coexist on the tablets like they do on the Linux desktop. That's pretty ambitious for a low-powered tablet, but we're all for more flexibility -- which seems to be in the cards with the Nokia-sponsored port of Ubuntu to ARM. Several pre-Hardy Heron versions have been ported and run off SD cards, if you're feeling adventurous -- we're not sure what the advantages are, but it's nice to know that Nokia's keeping things wide open.

[Via Digg]
In this article: 770, internet tablet os, InternetTabletOs, itos, maemo, n800, n810, nokia, qt, ubuntu
All products recommended by Engadget are selected by our editorial team, independent of our parent company. Some of our stories include affiliate links. If you buy something through one of these links, we may earn an affiliate commission.
Share
Tweet
Share
Save