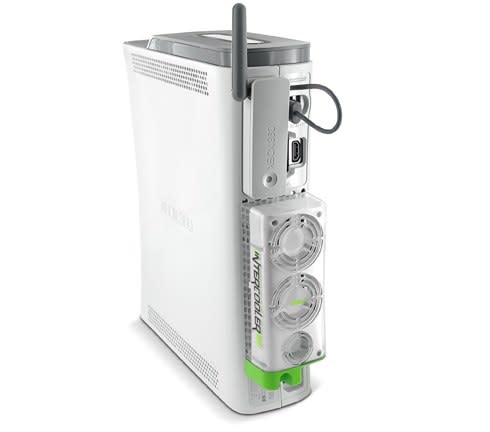 Never has one company mooched off of poor design like Nyko. Okay, so maybe that's a bit of a stretch, but according to the peripheral maker, the original Xbox 360 Intercooler is the top selling third-party accessory for the Xbox 360 -- despite the fact that it's known for torching consoles and leaving bits of carpet hot and bothered. Nevertheless, the long, long overdue Intercooler TS (for Xbox 360 and PlayStation 3) features a built-in temperature sensor and its own dedicated AC adapter, which will hopefully solve the aforesaid issues experienced with the original. This new, non-hazardous version will sell for $25, while the old, potentially hazardous iteration will somehow remain on store shelves for $20. Spend the extra $5 -- it's cheaper than a new house.

Update: Nyko pinged us to say that the original Intercooler is no longer being sold; the $20 version will be the Intercooler EX.
In this article: cool, cooling, intercooler, intercooler ts, IntercoolerTs, nkyo, overheat, overheating, playstation 3, Playstation3, ps3, sony, xbox 360, Xbox360
All products recommended by Engadget are selected by our editorial team, independent of our parent company. Some of our stories include affiliate links. If you buy something through one of these links, we may earn an affiliate commission.
Share
Tweet
Share
Save