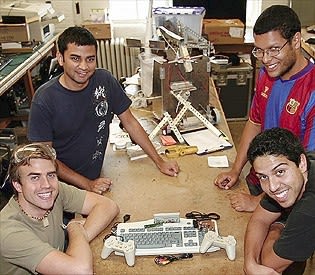 Alright, so it won't be a laptop, adorable, or have a cheeky Linux-based OS that's eventually replaced by Windows, but unlike the OLPC or the too-good-to-be-true $10 laptop, the $12 PC currently being developed at MIT will probably hit its price target. The project, being spearheaded by Derek Lomas and Jesse Austin-Breneman, is centered around cheap Apple II-based machines currently on sale in India and other developing nations that plug into televisions, and the goal is to update the systems with more memory, web access through cellphone tethering and actual storage. Considering we've already seen Apple IIs updated with Bluetooth and USB, and the less-powerful Commodore 64 can be used at LAN parties, we'd say all that stands between this project and reality is manpower -- any Apple II hackers out there ready to help?
In this article: 12 dollar pc, 12 pc, 12DollarPc, 12Pc, apple 2, apple ii, Apple2, AppleIi, Derek Lomas, DerekLomas, Jesse Austin-Breneman, JesseAustin-breneman, mit, twelve dollar pc, TwelveDollarPc
All products recommended by Engadget are selected by our editorial team, independent of our parent company. Some of our stories include affiliate links. If you buy something through one of these links, we may earn an affiliate commission.
Share
Tweet
Share