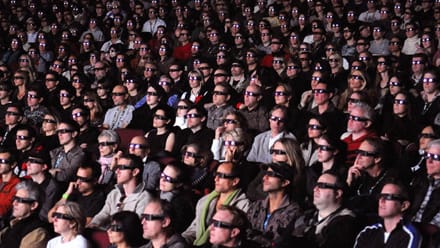 We're as tired of the doom and gloom economy talk as you are, but we just couldn't pass this one up. A new report from Bloomberg News has it that the current credit crunch (how's that for a buzzword?) is putting a damper on 3D cinema expansion. Which is quite funny, given the small flood of expansion reports that we've seen of late. Citing Cinedigm Digital Cinema in particular, it notes that plans to convert some 1,500 cinemas to 3D-capable venues have been replaced with plans that include 100 to 200. The lack of available 3D theater options could seriously hinder studios' ability to cash in and make back their own 3D investment; after all, who's really going to drive an hour of their way for a 3D version of a film showing just down the street? In reality, we don't expect this situation to be the rule going forward, but it'll certainly be interesting to see how studios feel about their 3D investments around this time next year.

[Image courtesy of U2]
In this article: 3d, 3d cinema, 3d theaters, 3dCinema, 3dTheaters, consumer spending, ConsumerSpending, economy, hd, movie theater, MovieTheater, other formats, other hardware, otherformats, otherhardware, theater
All products recommended by Engadget are selected by our editorial team, independent of our parent company. Some of our stories include affiliate links. If you buy something through one of these links, we may earn an affiliate commission.
Share
Tweet
Share
Save