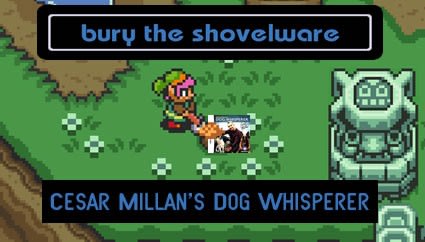 You know, I usually have a fairly decent idea of where most of these shovelware titles are going. That's not to say that I haven't been disappointed or pleasantly surprised before, but judging a book by its cover is often appropriate with shovelware. Yet I honestly have no clue what this game will have me do. Is it a Nintendogs clone? Will I be tapping dogs on the neck in a tap-happy minigame? Will I have to make that "tchsszzt" noise into the DS's microphone? Let's find out.

One word: UBISOFT. That's correct; the "not-a-bad-company-per-se-but-still-known-for-creating-copious-amounts-of-shovelware" gaming bigwig both developed and published this title.

Again with the scarcity of critical reviews. Perhaps that will be yet another factor that we'll have to consider: does a lack of reviews usually indicate that a game is terrible? We'll get back to that one in the Deduction.

Metacritic was able to find two reviews for the game. IGN said that "those willing to take the plunge will at lean [sic] glean some practical knowledge from the experience," while ZTGameDomain (!?) feels that "this game is simply a waste of DS battery life." Oh, snap! These aren't exactly votes of confidence.

This game is surprisingly not-terrible. The activities are actually kind of fun, if not slightly soothing in their simplistic repetitiveness. There's a wealth of information to be found in the goofily-named "Cesarpedia," and there's actually some useful information to be learned .

This is probably as good a time as any to mention that not everyone approves of Millan's tactics, including the American Humane Society. These criticisms seem to range from legitimate to the dog-pile (believe me, no pun intended) on the popular guy. In other words: much like the way that Brain Age won't have you understanding quantum physics any better, this game should probably not be your sole source of dog-rearing advice.

Don't get me wrong; I won't be spitting on my copy of Contra 4 while shouting "YOU HAVE BEEN DETHRONED." I still wouldn't classify this as a good game, and I do still think it fits the bill of shovelware. But it's not an abomination. For those who enjoy the television show and love dogs, there are worse ways to spend your money.

As I mentioned earlier, it's notable when very few reviews are available. It's well known in the film industry that when a distributor refuses to screen a film for critics, they're fairly certain that the movie is terrible but can still draw people into the theaters. What does that say about the film companies? It's either that they think the public is too dumb to tell a good movie from a bad one, or that they're more in touch with the average movie-goer than the critics. But how does this transfer to gaming?

It should be made clear that I'm far from an industry veteran. Yet from what I've learned, it appears that the process is quite different when reviewing video games as opposed to film. Publishers are a bit more selective with what titles get sent and who receives them. While a giant like IGN is likely receiving copies of every game that is released, smaller and hipper sites aren't given the same resources. We're forced to wonder about the connections between well-funded gaming sites and the companies that make games. If you're anything like me, you find it slightly curious when reading a glowing review for a game which has advertisements for the same game plastered all about.

It seems to become a news item when an anticipated movie is purposely not screened for critics. Yet I can't find any consistent trait of this happening with gaming. Thus, it's hard to make a judgment with any kind of certainty about a game with few to no reviews. Hopefully, we will learn more about the inner-workings of the overall review process as the industry continues to grow .

In gaming, the term shovelware refers to any game in which time and effort were eschewed in favor of turning a quick profit. Bury the Shovelware takes a closer look at these titles, typically those that inhabit the lower end of metascores. It attempts to: 1) find out where and how the developer went wrong 2) identify common traits present in most shovelware 3) measure how long the game can be suffered.
In this article: cesar-millan, dog-whisperer, joystiqfeatures, nintendogs, shovelware, the-dog-whisperer
All products recommended by Engadget are selected by our editorial team, independent of our parent company. Some of our stories include affiliate links. If you buy something through one of these links, we may earn an affiliate commission.
Share
Tweet
Share
Save