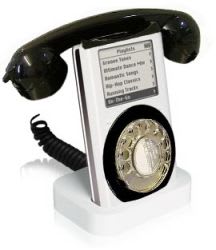 Rumor has it that AT&T's gearing up for yet another door-busting, riot-inducing summer filled with new iPhone hardware, which would certainly jibe with everything we've heard in the past few months (never mind the fact that June is officially Apple's iPhone release cycle these days, and indeed, AT&T's apparently saying that the June cycle is becoming "a tradition"). That's not terribly interesting at this point -- what is interesting, though, is how AT&T plans to play it. Apparently, the carrier wants to ramp up its -- ah, how should we put this in a politically correct way -- "integration" with Apple's hardware, including a U-verse app that we're guessing will approximate the functionality to be offered by Verizon's FiOS. What really has us worried is not so much the U-verse app specifically, but the possibility that AT&T's sick and tired of having its crapware left out of its highest-profile device, leading to non-removable garbage like Cellular Video on a future iPhone's home screen. It's still a bit early to sound the alarm there, but you know, we're paranoid types around here. Meanwhile, it sounds like the new device is once again begin said to rock higher 3G speeds than the outgoing model, implying that 7.2Mbps HSDPA to match AT&T's latest infrastructure upgrades is plausible, if not probable. Finally, it's said that a $99 netbook running something other than Windows (don't suppose that'd be Linux?) will be launching this summer, following on the 3G-enabled Aspire One that hit Radio Shack late last year. Heads up, though, AT&T: give us an iPhone with your Mobile Email app on the home screen, and let's just say we can't be held accountable for our actions afterwards. We know you wouldn't do that, but just sayin'.

In this article: apple, att, fiber, hd, internet, iphone, rumor, u-verse
All products recommended by Engadget are selected by our editorial team, independent of our parent company. Some of our stories include affiliate links. If you buy something through one of these links, we may earn an affiliate commission.
Share
Tweet
Share
Save