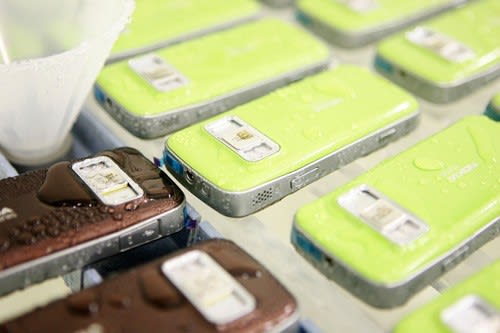 So, there's good news and bad news here, and we're opting to go against tradition by dishing out the positive first. Nokia just pushed out its Q1 2009 results, and while many firms have been struggling to stay afloat, at least it managed to turn a profit of €122 million ($160 million). That said, it's still looking at a staggering 90 percent drop in profits compared to its first quarter of 2008, where it raked in a mind-boggling €1.222 billion ($1.6 billion). Not surprisingly, sales were also down 27 percent to €9.28 billion ($12.2 billion) from €12.7 billion ($16.7 billion). Of course, Nokia's far from being alone in having to showcase less-than-beautiful Q1 numbers, but in reality, the damage could've been much worse; in fact, shares of the company's stock inched up by 8 percent following the reveal, as many had feared an even more significant decline. All in all, Nokia's still holding strong to a 37 percent market share worldwide, and if CEO Olli-Pekka Kallasvuo has anything to do with it (hint: he does), things should be on the up and up here soon.

[Via BBC]
In this article: business, cellphone, earnings, economy, growth, industry, loss, losses, Nokia, profit, quarterly earnings, QuarterlyEarnings, sales
All products recommended by Engadget are selected by our editorial team, independent of our parent company. Some of our stories include affiliate links. If you buy something through one of these links, we may earn an affiliate commission.
Share
Tweet
Share