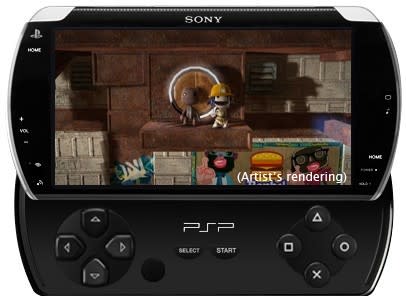 You can be sure this won't be the last PSP rumor to surface before E3, but the word going around now is that the so-called PSP Go! (or PSP2, or PSP Slide...) won't rely primarily on some internal memory for storage as previously speculated, but on something like Sony's new Memory Stick HG-Micro format, which is about 40MB/s faster than a standard Memory Stick Duo card. That word apparently comes from some "sources close to PSP development" that have spoken to PC World's Game On blog, who seem to also be suggesting that the Memory Sticks would effectively replace UMDs as a game delivery format, and not simply be used for downloaded games and whatnot. All of which certainly seems reasonable enough, even if it's still far from being anywhere close to official.

[Via Joystiq]
In this article: memory stick hg micro, memory stick hg-micro, MemoryStickHg-micro, MemoryStickHgMicro, psp, psp 2, psp go, Psp2, PspGo, sony
All products recommended by Engadget are selected by our editorial team, independent of our parent company. Some of our stories include affiliate links. If you buy something through one of these links, we may earn an affiliate commission.
Share
Tweet
Share
Save