Nike teases self-lacing shoes you can control from your phone 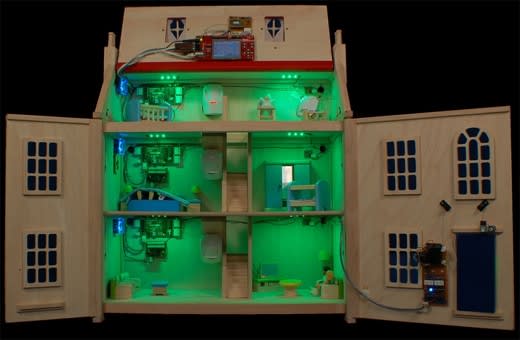 We've seen all sorts of devices that learn over time, though most of them fall into the humanoid category. Now, a team of gurus over in the UK has developed an entire home that can learn from those dwelling in it and react in order to curb energy waste and even prevent unauthorized entry. InterHome, a model designed by researchers at the University of Hertfordshire, is scheduled to be unveiled at the Microsoft Imagine Cup finals, and it should make other home automation systems look rather antediluvian in comparison. By sensing how the owner(s) like their climate and such, it can reportedly save up to £300 a year in energy costs alone. Furthermore, it can "take decisive action and text if it is being burgled or the door has been left unlocked," and the whole system can be monitored remotely and controlled via the web. Too bad we're terrified that it could one day turn on the owner and refuse to allow entry to anyone other than leaders of The Resistance, but other than that, it sounds pretty nifty.
In this article: adapt, adapts, energy, energy efficient, EnergyEfficient, green, home automation, HomeAutomation, house, InterHome, learn, learning, learning house, LearningHouse, microsoft, uk, university, University of Hertfordshire, UniversityOfHertfordshire
All products recommended by Engadget are selected by our editorial team, independent of our parent company. Some of our stories include affiliate links. If you buy something through one of these links, we may earn an affiliate commission.
Share
Tweet
Share