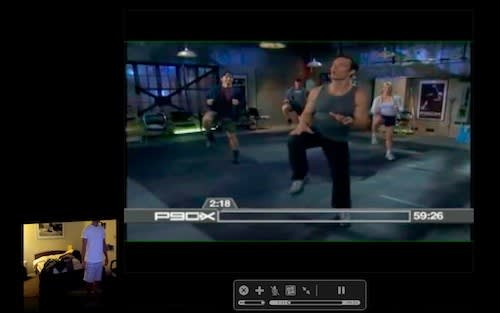 Whether it's because you're at school or work all day, finding the time and energy to workout is difficult. So, why not make it easier on yourself and find a partner to workout with via iChat Theater?

When iChat went Leopard, it included a series of features and enhancements. One of these enhancements was iChat Theater. iChat Theater allows you to share documents, photos and videos with your buddies in an easy and oh-so-Apple elegant way. With Snow Leopard, iChat Theater gained the capability of displaying content at a higher resolution: up to 640 by 480 pixels.

While photos and presentations translate well over iChat Theater, I've found that sharing videos is not without its hiccups unless you have an extremely fast and consistent Internet connection with robust upload speed. I've found both video and audio quality to be unacceptable for watching movies or TV shows.

But this doesn't really matter when you're working out.

Sure, there may be some lip syncing (audio delay) and the video quality may not be the greatest, but hey, you're working out: you've won the biggest battle already. And, you're not alone: your buddy on the other side of the iChat will push you along as well.

Alternatively, you could start a video chat with a buddy and then initiate iChat Theater.

My sister recently purchased the P90X workout program for me as a gift, and an intense workout regimen it certainly is. After I opened up the box set, I immediately created an iPhone formatted version of it (HandBrake), which I take with me when I workout at the gym or the park with a friend of mine. On days when I'm working out at home (after a long day's work, of course), the workout sessions are done over iChat Theater.

So while iChat Theater can't do all the heavy lifting for you, it certainly finds alternative ways for you to motivate yourself to do it.

In this article: fitness, ichat, ichat theater, IchatTheater, lose weight, LoseWeight, p90x, workout
All products recommended by Engadget are selected by our editorial team, independent of our parent company. Some of our stories include affiliate links. If you buy something through one of these links, we may earn an affiliate commission.
Share
Tweet
Share