Twitter’s faster, redesigned site starts rolling out to everyone 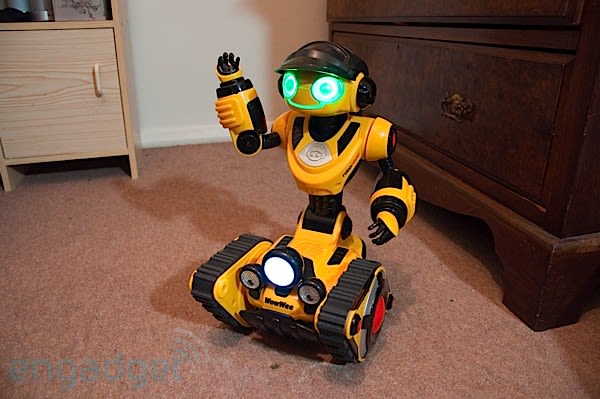 See that glowing face? Yep, it's the super-enthusiastic Roborover from WowWee. We won't lie: we were a bit stoked by the arrival of this yellow explorer at Engadget's doorstep. Too bad it didn't exactly walk all the way from its warehouse, forcing us to go through the painful procedure of cutting up the tapes and untangling the ties of its shipping box. Five minutes later we've got a 4-pound robot on our hands, and we'd say overall the build quality is an eight out of ten (the cuts on the plastic parts could do with a finer finish) which is pretty good for a toy. You'll be pleased to know that those treads are for real and supported by a third mini roller at the back, but the friendly manual does say, "For indoor use only." Think we'll skip that page, thank you. Now kids, you might need your daddy's screwdrivers and some extra cash to feed the Roborover three "C" size batteries, and another three "AAAs" for the chunky IR remote. All ready to go? Skip along to learn how the Roborover explores the "ancient tombs of your parents' closet."

Gallery: Review: WowWee Roborover gets friendly with your furniture | 10 Photos

It's time to power on our new friend here with the little push button right next to the waist. "Ah! It's a good day for an adventure." Oh boy, we were immediately greeted by a loud voice on sugar rush, overly obsessed with "ancient artifacts" and telling you "this floor needs vacuuming." For the first 5 minutes or so the repetition of phrases became rather annoying, then we learned that the Roborover needs more commands in order to "learn" more words. Not that this is going to stop Roborover from saying the same intro lines in the same loud volume every time you switch it on. This is where we whip out the controller: here we have a four-way direction pad with a stop button (which also controls the volume by holding it down), a trim dial for tweaking the robot's path, five mode buttons and a headlamp button. Nope, nothing for the arms -- turns out they are only for posing so you''ll just have to grab the robot to make it wave. Oh, and there's no mute button either so make sure you're in a good mood before the annoying voice floods your ear canals. Apart from the usual downsides of infrared the commands were responded to well, although sometimes the Roborover overrides these and does its own thing, which is rather worrying as we're pretty sure this violates one of the Three Laws of Robotics (no, not this one). Eventually Roborover will go into standby mode if it receives no commands for two minutes. Another ten minutes and you'll have to hit its bumper or use the power button to wake it up instead of using the remote control.

While the Demo mode features only three short performances to demonstrate the Roborover's movements, all we really want is to skip straight to the Explore mode: once activated, the robot walks around by its own will and uses its front and back optical sensors to avoid obstacles, but too bad it's got nothing to avoid tumbling down the staircase -- you've been warned. If you find this object detection too clever or annoying you can switch it off to make Roborover blind. The front bumper is also for the same purpose except the treads stick out ahead of it, so this renders it useless when Roborover hits objects that are wider than the bumper (the optical sensors were not 100% reliable). Shallow objects such as a folder or a small cushion were not a problem for the robot to drive over, provided they are no higher than about one inch as suggested by the manual. That said, we managed to tip the robot frontwards while driving over said objects and were disappointed that it couldn't lift itself up, but at least it was still walking around on the front side of the treads, albeit, face-down at 45 degrees.

Next up is the Lookout mode in which the Roborover stands on guard and acts startled if movement is detected in front of or behind it. It sounds cool and everything but there are three major disappointments: one is the confusing necessity to press the Lookout button twice to enable it; secondly, no weapons are equipped (but there's no stopping you from adding one); and thirdly, it doesn't work well at all as you'll see in the video. We were further let down by the Seek function where the Roborover is meant to sniff out the remote control's infrared signal, but a combination of interference and its inability to tell which is front and back killed the mood. If you're not already wondering "why did I spend $79.99 on this in the first place?" with annoyance, have a go on Game mode: you are given the generous option of "Tomb game" and "Swamp game." Both are similar memory games where the Roborover walks in a pattern and you have to reproduce the same path. Woohoo!

As with many things in life we expected more from this package, but as a toy the Roborover has enough features to keep the kids entertained for some time. Anyone else will be tempted to splay its circuitry wide to solder its chatty mouth shut after just a few days.
Source: WowWee Roborover
In this article: explore, features, headlamp, headlight, light, remote control, remote controlled, RemoteControl, RemoteControlled, review, roborover, robot, robotics, torch, toy, track, tractor, wowwee, wowwee roborover
All products recommended by Engadget are selected by our editorial team, independent of our parent company. Some of our stories include affiliate links. If you buy something through one of these links, we may earn an affiliate commission.
Share
Tweet
Share