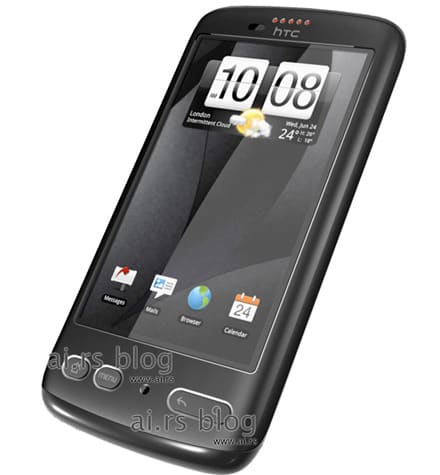 We realize we might have overfed you a little with that plentiful leak of HTC's 2010 plans, so here's a chance to better ogle and digest HTC's "Performance" flagship to be: the Bravo. Pairing Android with Qualcomm's 1GHz Snapdragon and presenting a 3.7-inch AMOLED facade, this certainly ticks the headline boxes, and the addition of a five megapixel AF cam capable of 720p video capture gives it an extra sheen of 2010 newness. The picture above is accompanied by less solid info indicating a 1,400mAh battery, which will be joined by the mandatory WiFi, Bluetooth and MicroUSB connectivity, plus MicroSD expansion, FM radio tuner, digital compass, and a 3.5mm headphone jack. Then again, the source is the same bunch of heroes responsible for our extra early -- and accurate -- info on the HD2, so those specs may be considered pretty reliable. Oh, if you're wondering about the touchscreen, it's capacitive, like it should be.

Update: If you were wondering about the difference between the Bravo and the recently leaked Passion, there is none other than the branding apparently. We're also hearing that the above handset will be available in the US in January, a cool three months ahead of the expected European release.
Source: ai.rs
Coverage: DigiTimes
In this article: 720p, amoled, android, bluetooth, bravo, capacitive, htc, htc bravo, htc passion, HtcBravo, HtcPassion, passion, performance, qualcomm, smartphone, snapdragon, touchscreen, WiFi
All products recommended by Engadget are selected by our editorial team, independent of our parent company. Some of our stories include affiliate links. If you buy something through one of these links, we may earn an affiliate commission.
Share
Tweet
Share