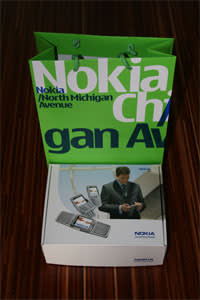 No surprises here, but Nokia has confirmed a Nokia Experts report today that the company will be shutting down its North American flagship stores in New York and Chicago, leaning on big boxes and carriers to handle the in-store experiences going forward. Considering the fractional market presence Nokia has in the States compared to the UK -- where it's closing its Regent Street location -- the move comes as no shock, but it's still a shame to see these really attractive, high-tech hero locations close down. The way we saw it, these stores were never about sales; they were about exposing Nokia to the public and vice versa in a cool, hip environment, and regardless of how you feel about the company's handsets, they'd effectively accomplished that with the flagship strategy. Here's Nokia's official statement, which confirms our opinion but takes the questionable stance that the stores have outlived their function now that "consumer awareness in the US has grown substantially":

"In North America, over 90 percent of consumer purchases are made through carriers - Nokia continues to support our relationship with carriers in this market, as well as the continued expansion of our retail partner network with the likes of Amazon and Best Buy (for example), in line with our strategy. As we continue to expand our services and solutions offerings across these various channels, we have decided to close the NY and Chicago stores to allow more concentration on our other channels.

The Flagship stores were originally conceived to inspire and educate consumers to the benefits of mobility through an innovative retail experience, and to broaden the appeal of the Nokia brand. Since opening the stores in NY and Chicago (2006), consumer awareness in the U.S. has grown substantially. Weighing those dynamics with Nokia's clear strategy in North America, and our well-established retail channel with third parties, we will close these two stores (New York and Chicago) in early 2010.

This decision was made to create clear alignment with our local market strategy and, in addition, as part of a global realignment of our retail strategy in overall."

Source: Nokia Experts
In this article: breaking news, BreakingNews, chicago, closing, closure, flagship, flagship store, FlagshipStore, new york, NewYork, nokia
All products recommended by Engadget are selected by our editorial team, independent of our parent company. Some of our stories include affiliate links. If you buy something through one of these links, we may earn an affiliate commission.
Share
Tweet
Share