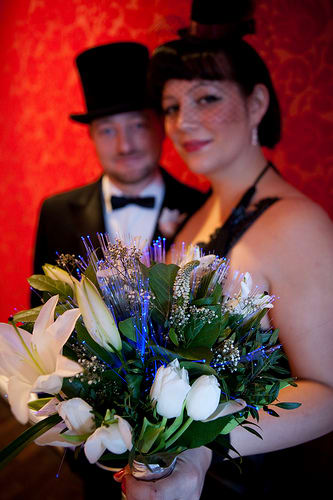 When geeks get married, there's always room for some nerdy insanity. This new take on the bouquet comes to us via just that route -- a couple of geeks getting hitched decided to DIY themselves an LED bouquet which responds to changes in Galvanic skin response (GSR). So, when the LEDs are blue, the person holding the flowers is essentially calm, whereas white LEDs indicate excitement. Now, the bouquet cannot actually tell us if the excitement stems from being overjoyed or horrified to find out that your intended owns a fully realized and accurate Quark costume, but at least it'll give you some clues to start with. Regardless, this awesome contraption is also capable of recording heartbeat rates for both bride and groom and makes use of a 1GB SD card to store the data, and other features like infrared proximity sensors to record how many times a day the bride and groom are near each other. Check out the video of the bouquet after the break.

Via: Make
Source: Biometric Social Interaction
In this article: biometrics, diy, hack, hacks, infrared, led, leds, mod, mods, proximity sensors, ProximitySensors, wedding, weddings
All products recommended by Engadget are selected by our editorial team, independent of our parent company. Some of our stories include affiliate links. If you buy something through one of these links, we may earn an affiliate commission.
Share
Tweet
Share