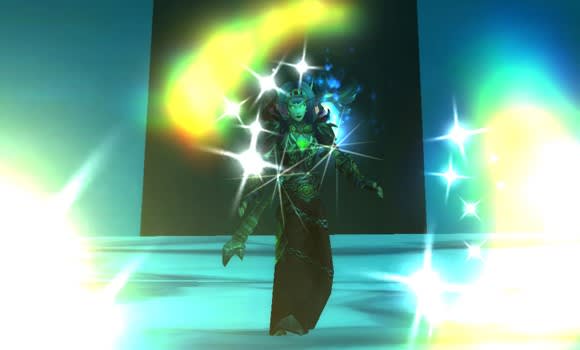 Every Sunday (and the occasional weekday) Spiritual Guidance offers holy and discipline priests advice on how to wield the holy light and groove to the disco night. Your hostess Dawn Moore will provide the music.

Last week, Blizzard activated the first stage of the scaling raid buffs in Icecrown Citadel. When entering ICC now, you'll see either Varian Wrynn's hair (and the rest of him, attached) or the conglomeration of cliches we refer to as Garrosh Hellscream. Each NPC grants a faction specific buff to your raid party which increases your health, healing done, and damage done by 5%. Periodically, the strength of these buffs will be raised a notch by Blizzard, thus allowing guilds of various commitment levels to see all of Icecrown Citadel.

So, what does this little news item have to do with priests any more than the next other class? Well, if you're a discipline priest and your lip gloss be poppin' bubbles be poppin', you'll notice that they are not poppin' with any more oomph than they did the week before. That's because, for whatever intended or unintended reason, the buff does not apply to Power Word: Shield.

Don't have a panic attack, disco priests. In this article I will be addressing the issue, particularly for non-priests who might have misconceptions about the validity of a disc priest. I'll also be rehashing some older arguments. That's right folks: it's that time again! When all of Azeroth asks! *Cue game show music* What good is a disc priest?

Update: Blizz has announced in the notes for patch 3.3.3 that Power Word: Shield will now benefit from the ICC zone buff. While that makes portions of this article obsolete, keep reading to learn more about the benefits of bringing a discipline priest to your raid.

The 'what good is a disc priest?' blog post has been done many times over by various authors. Despite this, I get an e-mail once a week from a concerned or troubled player who is running into problems touting their spec to a raid. Seeing as I've only been writing for three months now, I can't imagine how frequently Matticus or other priest bloggers saw this question over the past year. It's been answered in many ways, but given that the issue still stands, and the buff adds some timeliness to the argument, I will be tackling the issue myself. Groan now if you must.

The discipline spec is a bit difficult to understand for the raiding ninny. Why "prevents damage" makes no sense to some people boggles my mind. Of course, the meters thing is a common and reoccurring issue. People want to see things with their eyes - even if their vision is limited to some colored lines on an AddOn with the aesthetic of Geocities. (Yes, that was me calling you out Recount. Be prettier! Function over form is no excuse after so many years!) I've discussed before how to remedy the burden of proof, so let's not go into that. Instead, I want to dispel a myth that discipline priests don't heal:

Shields and damage mitigation are the signature trait of discipline, but the spec has very capable healing abilities. Those heals will be smaller than the heals of other healing classes, but they are tough actin' fast-acting and apply several buffs to the target in the process. The average Penance, for example, will crit at least once (and more frequently, twice), activating Inspiration and Divine Aegis. Grace is also applied, which will buff the strength of any heals the priest applies to that target thereafter. All these effects combined on a target will help stabilize a dropping health bar, allowing a priest to then bring that health bar up to full at his own pace.

What a discipline priest lacks in HPS, she makes up for in raid utility. The talent Renewed Hope, for example, applies a 3% damage reduction aura to the raid whenever a discipline priest casts Power Word: Shield. Focused Power reduces the cast time of a priest's Mass Dispel, meaning there is a high chance you will actually see that dispel be effective. Pain Suppression, another signature ability of the discipline tree, can act as an extra tank cooldown or lifesaver to anyone in the raid who needs it. While it is not fail-safe like holy's Guardian Spirit, it has a shorter cooldown (assuming Guardian Spirit is not glyphed or fully consumed). Finally, Power Infusion is a favorite buff of every caster DPS in your raid. The fact that so many DPS fight over who gets this buff should tell you how valuable it is. When used on the priest himself, or another healer, it can sometimes stand in for a tank cooldown just by throwing more heals at the target.

Now onto the bubbles: A discipline priest's Power Word: Shield is considerably stronger than anything a holy priest could spec into. That's because the deep discipline talent, Borrowed Time, buffs the spell's spellpower coefficient by an additional 40%.

And before I forget, let's talk about Rapture. Rapture is greatly overlooked as a raid asset, and it is another talent too deep for holy priests to access. As the tooltip states, Rapture will, once every 12 seconds, return mana, rage, energy, or runic power to the shielded target when the shield is completely absorbed. (The priest who casts the shield also receives additional mana, explained further by this favorite video of mine.) Let me give you another perspective: the other class I play is feral druid. I kitty pounce about, wave my paw about when I /dance, and it's all good fun. I don't know about other classes, but as a feral druid 16 bonus energy is no small gift; especially when you're staring at your energy bar, cooldowns, and buffs in near tears, wishing you could get a sliver more of energy so you could get out a Ferocious Bite without gibbing yourself of the energy you need to not let your Savage Roar or Mangle(lol 3.3.3) fall off. Energy management is a lot harder than smacking mana cooldowns when you're OOM, and a gift from some raid bubbling saint every 15-30 seconds would help my DPS significantly. That DPS will help the raid in turn. That's just one example, now try applying it to any part of your raid.

Let's get back to bubbles, though. I've already written an article about bubble spam, but I just want to reiterate what spamming shields means. It means that damage which would otherwise one-shot a player, won't. It means giving everyone in your raid a little more room to screw up. It means taking the edge off of spiky burst damage. It means your healers have more time to react. It means less healing, which allows healers with less mobility a little more time to focus at keeping themselves alive. It does all these things, and that is why almost every top guild takes one to a raid; not to tank heal, but to take the bite off a fight. And that leads nicely into this issue with the ICC buff.

Just because everyone is going to be healing for more doesn't mean damage mitigation is going to be any less desirable. Boss damage is not changing, so a shield will be as effective as it always was. Further, just because a priest's shields are not being affected by the buff doesn't mean it's smart for that priest to be the first healer you remove from your raid comp when encounters get easier. If anything, have your second pally or druid switch. (What holy paladin doesn't secretly desire to reap a shred storm?) Healing for 5% or 10% or 30% more, or having more health in general, will not change the fact that some of the fights in ICC are legitimately hard, requiring strategy and good execution. Attacking the Lich King with brute force alone, even with buffs, is not going to lead to a victory. So, if you have a good disc priest on hand, use them and don't think because they aren't receiving the same impact of the buff they're holding you back. Lady Deathwhisper, Festergut, Professor Putricide, and the Lich King are all fights you would absolutely want to have a disc priest on, but ICC aside, good disc priests are a raid buff in themselves.

By the way, I apologize for that Lil Mama song reference earlier. Here's some Journey to make up for it.

Addendum: I try to leave the "how to do this fight" to Matticus' column, Raid Rx. However, since Matt hasn't covered all of Icecrown Citadel yet, I thought I'd throw a very simplified breakdown of where and how to use a disc priest in ICC. Here it goes: