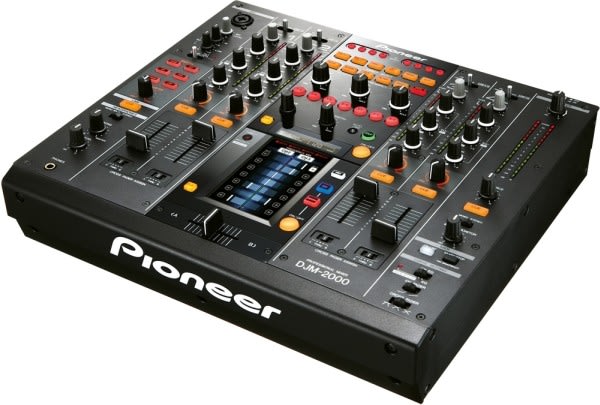 Ready to graduate from DJ Hero? Got a house payment handy? Then Pioneer would like to show you the way to the pros. Say hello to the DJM-2000, a four-channel digital mixer built around a 5.8-inch multitouch screen and sporting enough knobs, buttons and sliders for a NASA launch sequence. Designed to play nice with the matching CDJ-2000 players Pioneer released last year, the unit features an integrated audio effects suite with six dedicated processors and several intriguing modes for multitouch music control. While the mixer has the traditional crossfade slider that allows DJs to assign a certain percentage of the output to channels on the left and right, the DJM-2000 debuts with "frequency mix," a mode that lets DJs assign within seven narrow frequency bands as well by manipulating virtual sliders on the touchscreen, and a "sidechain remix" mode that uses the screen to apply custom effects in real time. Yeah, it's not as wild as some other touchscreen DJ rigs we've seen, but at least this one's for sale: Pioneer says the mixer will retail for $3000 this June. Droolworthy video demonstrations after the break.

Source: Pioneer EU, Pioneer USA, Pioneer DJ
In this article: CDJ-2000, dj, DJM, DJM 2000, DJM-2000, Djm2000, mixer, mixers, multi-touch, multitouch, music, Pioneer, Pioneer DJM 2000, Pioneer DJM-2000, PioneerDjm-2000, PioneerDjm2000, touchpad, touchscreen
All products recommended by Engadget are selected by our editorial team, independent of our parent company. Some of our stories include affiliate links. If you buy something through one of these links, we may earn an affiliate commission.