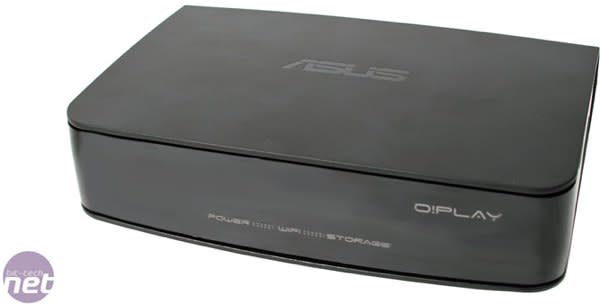 When we first saw the ASUS O!Play Air set-top box the latter part of last year, we were interested -- when looking for a networked media player, it's definitely good to have options. Now that the kids at Bit-Tech have got their hands on a review unit, however, are enthusiasm has dampened quite a bit. Sure, it looks good in print: HDMI 1.3, composite video and audio output (for lovers of antiques), eSATA and USB ports, CF, SD+MMC, MS+MS Duo card readers, and 802.11n -- none too shabby, eh? Once you got past the "greasy plastic outer surface," however, things were not so awesome. The interface felt "sluggish" as the reviewer "repeatedly watching the timer... waiting for menus to load," and the device itself eschews support for Dolby TrueHD and DTS MasterHD in lieu of multichannel HD LPCM audio over HDMI -- a tongue twister for sure, but also a deal-breaker for some. On the other hand, the kids did find the UI intuitive, and an automatic media preview especially helpful for wonky filenames. The question remains -- is it worth it for $130?
Source: Bit-Tech
In this article: 1080p, ASUS, ASUS BR-HD3, asus oplay, asus oplay air, AsusBr-hd3, AsusOplay, AsusOplayAir, BR-HD3, hd stream, hd streaming, hdmi, HdStream, HdStreaming, hdtv, o play, OPlay, stream, streaming, wireless hdmi, wireless hdtv, WirelessHdmi, WirelessHdtv
All products recommended by Engadget are selected by our editorial team, independent of our parent company. Some of our stories include affiliate links. If you buy something through one of these links, we may earn an affiliate commission.
Share
Tweet
Share
Save