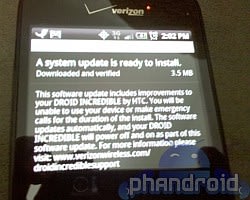 Saturday afternoon, reports came in that Verizon's new Droid Incredible had already received its first OTA update. Nobody knew quite what it did and few even received it, but some figured it probably fixed the smattering of random reboots and radio bugs experienced by some early adopters. We reached out to Verizon on the matter, and we're afraid to say that's not the case -- the new 1.22.605.2 CL161494 software build merely fixes a bug in Microsoft Exchange support. As such, you'll only see the update if you've got a corporate handset, and those who do can expect their carbon-copy email fields (which would apparently fill with unintended addresses beforehand) to be fixed sometime around May 6th. On the off-chance that fix magically transforms your mobile world, feel free to let us know in comments. Full statement after the break.

It was discovered that customers using Exchange for corporate email may find when an email is opened that has no recipients in the CC field, unintended recipients email addresses can sometimes be added into the CC field from previously received emails when the user selects the reply all function. The update that is being pushed to customers is to correct that issue. THIS ONLY IMPACTS EXCHANGE Users (corporate users).

Source: Phandroid
In this article: Android, Droid Incredible, DroidIncredible, Exchange, HTC, HTC Incredible, HtcIncredible, incredible, Microsoft Exchange, MicrosoftExchange, OTA, OTA update, OtaUpdate, over the air, OverTheAir, update, Verizon, verizon wireless, VerizonWireless, vzw
All products recommended by Engadget are selected by our editorial team, independent of our parent company. Some of our stories include affiliate links. If you buy something through one of these links, we may earn an affiliate commission.
Share
Tweet
Share
Save