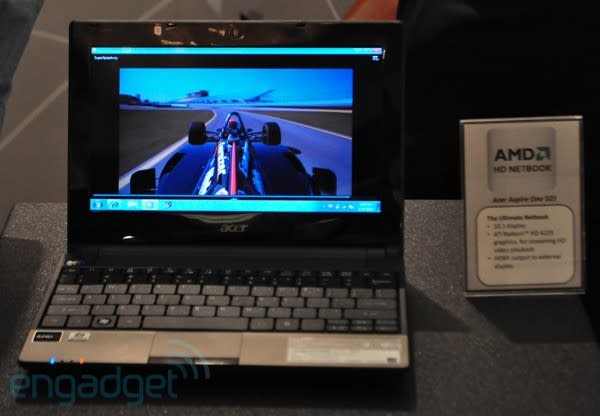 Sure, Acer may already have the Ion 2-powered Aspire One 532g in its arsenal, but who's going to complain about two more HD-capable, 10-inch netbooks? Showing some serious love to AMD, the Acer Aspire One 521 and Gateway LT22 both pack new 1.2GHz AMD V105 processors along with ATI Mobility Radeon HD 4225 graphics. The latter is what had us most impressed when we caught some time with the duo at the Netbook Summit -- the 521 and LT22 handled 1080p WMV video and light gaming without any stuttering. We'll hold our real performance conclusions until we can test the battery life on these bad boys, but other than that they look like decent netbook contenders with the standard 1GB of RAM and 160GB hard drives. And unlike the typical Atom netbook, they have HDMI ports. We can't say we're the biggest fans of the 521's in-your-face Aspire One branding on its glossy cover, but the LT2203 delights with its textured matte lid. No word from Acer on the availability and pricing of these here in the US, but hit the gallery below for some imagery, or the source link even further below for a video of these two in action.

21
Source: LAPTOP Magazine
In this article: acer, acer aspire one, acer aspire one 521, AcerAspireOne, AcerAspireOne521, amd, amd neo, amd v105, AmdNeo, AmdV105, aspire, aspire one, aspire one 521, AspireOne, AspireOne521, Gateway, Gateway LT22, Gateway LT2203, GatewayLt22, GatewayLt2203, hands-on, impressions, LT22, LT2203, netbook, netbook summit, NetbookSummit, preview
All products recommended by Engadget are selected by our editorial team, independent of our parent company. Some of our stories include affiliate links. If you buy something through one of these links, we may earn an affiliate commission.
Share
Tweet
Share