Core i5 / i7 roundup: Panasonic fits Core i7 in netbook chassis, Dell and HP machines spotted at Staples 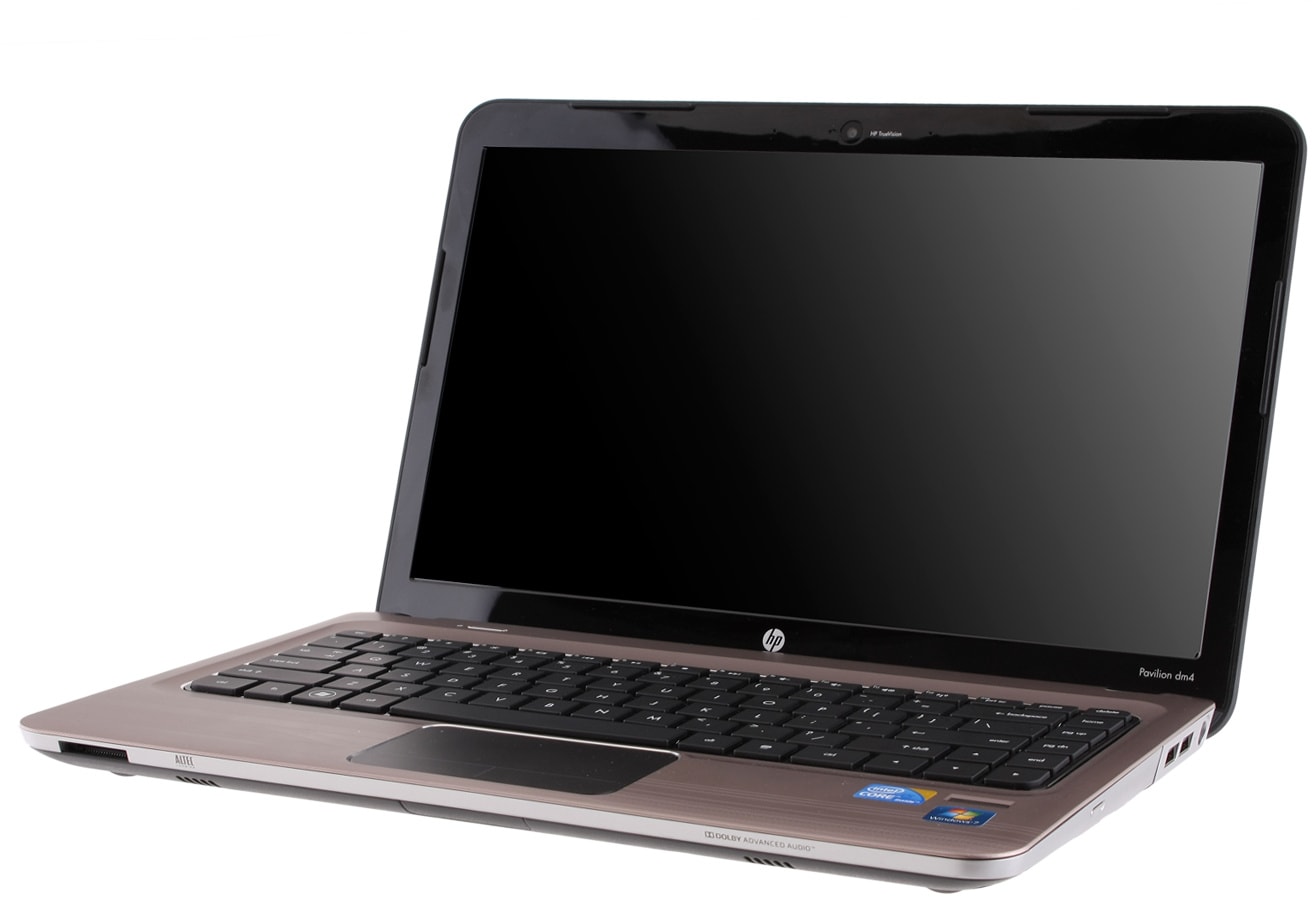 Sit back and sprinkle a few new processors into its Pavilion line up? Nope, that's exactly what HP didn't do this year when it came to refreshing its successful multimedia laptop brand. Instead, it has remade the entire series by subbing plastic for metal, adding a chiclet keyboard and trimming down the measurements. The 14-inch Pavilion dm4 is one of the more portable of the bunch, and though it's only slightly thicker than an inch, our $905 review unit packed a Core i5 processor, 320GB hard drive and 4GB of RAM. It sure does sound and look like a really tempting mainstream laptop, but one thing in particular continues to hold HP back. And we'll tell you just what that is... in our full review after the break!

How would you rate the Pavilion dm4?
We want to hear what you think. Post a quick review now to join the conversation!
Write a review

"Glossy plastics? Does anyone really like 'em? Let's go with metal. Lots of metal!" That's how we picture the HP's lead designer deciding on the new look of the Pavilion series. Gone are the shinny black lids of the past, and instead the entire lid of the dm4 is covered in a smooth, greyish aluminum. Though we could see some being off put by the braid-like etching that runs horizontally across the cover, we actually dig it -- and the backlit HP logo on the lower left-hand corner suits our fancy, too. The metal coating stretches underneath the lid to the palmrest, but the bottom of the system is still made of plastic to accommodate swapping of the RAM or hard drive.

The 4.4-pound dm4 feels incredibly solid, and at 1.27 inches thick, it's slender enough to carry around in a messenger bag. Unlike the crop of ULV laptops, the machine does have an onboard optical drive. It also makes room for two USB ports, a USB / eSATA combo, HDMI, Ethernet, VGA, microphone and headphone jacks. We don't know if it was just our review unit, but the eSATA / USB port was incredibly hard to fit a flash drive into. We finally did jam it in there, but not without worrying that we were going to totally wreck the thing in the process. There's a fingerprint reader on the palmrest, and though we had no issues enrolling our thumb with the software we really do wonder how many actually use the security feature.

Along with the rest of the industry, HP has moved to using a chiclet style keyboard, and we can't praise the soft coated squared-off keys enough. They felt incredibly firm and oh so nice under our fingers. Instead of a dedicated strip of touch media controls, HP integrated them into the keyboard's function row, but you don't have to select the Fn key to adjust the volume or pause or play media. It's sort of a bummer that the there's no backlit option like the new HP Envys, though.

We know the suspense is killing you, and you're dying to know about that one major drawback of the dm4. From the bottom of our heart, thanks for waiting. Now, given our experience with the Envy 13 and 15, are you surprised that the Achilles' heel is the dm4's Clickpad? Probably not. While HP claims to have spent a lot of time improving the multitouch gestures, we still can't convey how frustrating it can be at times. More often than not, when we kept a thumb on the left button and used our index finger to push around the cursor, it suddenly jumped to a random spot on the screen. While it is better than previous versions, there are inherent usability issues with the setup and software. Oh, and the multitouch gestures are also less than stellar – two finger scrolling is often inaccurate and choppy. Sure, you can navigate by just double tapping on the pad or pick up an external mouse, but it's really disappointing that basic ergonomics continue to muck up HP's best laptops.

The Pavilion dm4's 14.0-inch, 1366 x 768-resolution display is plenty bright, yet incredibly glossy. Speaking of which, what will it take for a matte display comeback? A revolution? An uprising? Back to the dm4's display – its viewing angles aren't as unbearable as some ASUS and Acer systems, but tilting the screen backwards to watch a YouTube video with a friend caused colors to darken. On the other hand, the Altec Lansing speakers on the front lip of the laptop are pretty great, and truthfully some of the better laptop speakers we've heard recently. You will judge us on our music choice, but La Roux's "Bulletproof" sounded full and far from tinny -- and yes, we could still hear the music over our terrible rendition of the song.

Our dm4 review unit was outfitted with a 2.40GHz Intel Core i5-520M processor, 4GB of DDR3 RAM, and a 320GB 7,200rpm hard drive. All of the components contributed to extremely snappy everyday performance. Looking beyond the benchmarks, the dm4 was quick to open programs like Microsoft Office 2007 and Hulu Desktop. And simultaneously running Firefox, TweetDeck, Microsoft Word and a DVD in Windows Media Center didn't cause any noticeable lag. Though the dm4 is available with an ATI Mobility Radeon HD 5450 GPU for an extra $100, our unit relied on Intel's HD graphics. The integrated solution was fine for watching local and streamed HD content, but when we fired up Batman: Arkham Asylum we were pretty disappointed to see Caped Crusader throwing punches at 25fps.

We've been using the dm4 for the last two weeks, and we're continuously impressed with the battery life. In typical use – writing posts, IMing with friends, updating Twitter and surfing in Firefox – we've consistently seen about 5.5 hours of AC adapter-free use. On our video rundown test -- which loops the same standard definition clip with brightness set to 65 percent -- the dm4's six-cell 62Wh battery lasted four hours and 25 minutes. That's not to shabby for a laptop with a standard voltage Core i5 processor, especially considering the $899 Toshiba Satellite E205 lasted less than three hours.

As per usual, HP gets it own section on software since it continuously preloads its laptops with just too many unnecessary applications. In the case of the dm4, there's actually some useful stuff, but it's muddled by deleteware. The best example of that juxtaposition is HP's dock – the panel can be centered either on the top or bottom of the desktop and contains a number of shortcuts, including Norton, Snapfish and HP's Advisor. Sure, it's easy to delete things and drag in new shortcuts, but flooding the dock with applications you really don't actively use on a daily basis seems to be the motive here. In addition to that, the desktop came preloaded with McAfee, eBay and HP Games shortcuts. But it isn't all fail on the software front – the HP MediaSmart software is very polished and contains shortcuts to other media software programs. HP's QuickWeb instant-on OS, which is powered by Splashtop, is also very attractive, though we consistently wonder who uses the pre-boot environment when it takes just a few more seconds to get into Windows 7 Home Premium.

It continues to be a real real shame that the one real issue we have with HP's laptops continues to be something we consider to be fairly standard and simple technology these days. Honestly, we don't need anything fancy when it comes to a touchpad -- just a large pad and two comfortable buttons. Other than its flaky navigation input, the $904 system – though it's a bit overpriced compared to the competition -- packs just the right balance of style, power and endurance. We much prefer the dm4's aesthetic to comparable systems like Dell's Inspiron 15 and Gateway's offerings. But of course, at the end of the day what good is all that if you can't push the cursor from one side of the screen without a problem?
Source: HP Pavilion dm4
In this article: core i5-520m, CoreI5-520m, dm4, hp, HP Pavilion dm4, HpPavilionDm4, intel core i5, Intel Core i5-520M, IntelCoreI5, IntelCoreI5-520m, laptop, laptops, pavilion, pavilion dm4, PavilionDm4, review
All products recommended by Engadget are selected by our editorial team, independent of our parent company. Some of our stories include affiliate links. If you buy something through one of these links, we may earn an affiliate commission.
Share
Tweet
Share