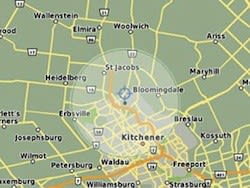 It's hardly the first company to implement the technology in a smartphone, but it looks like RIM finally has an answer for folks not satisfied with the GPS capabilities of their BlackBerry. It's now announced the simply-named 'Locate Service' for developers, which relies on cell tower triangulation to either augment the phone's built-in GPS, or completely replace it when a GPS signal isn't available. According to RIM, the service also includes a set of components that "integrate seamlessly" with the BlackBerry Maps and Contacts applications and, of course, the GPS capabilities of the device. There's still no word on any apps that actually take advantage of the new service though, but it is now at the disposal of developers, so we're guessing we'll see some soon enough.

Source: RIM, BlackBerry Developers' Blog
In this article: blackberry, cell tower, cell tower triangulation, cell towers, CellTower, CellTowers, CellTowerTriangulation, gps, locate service, LocateService, rim, triangulation
All products recommended by Engadget are selected by our editorial team, independent of our parent company. Some of our stories include affiliate links. If you buy something through one of these links, we may earn an affiliate commission.
Share
Tweet
Share