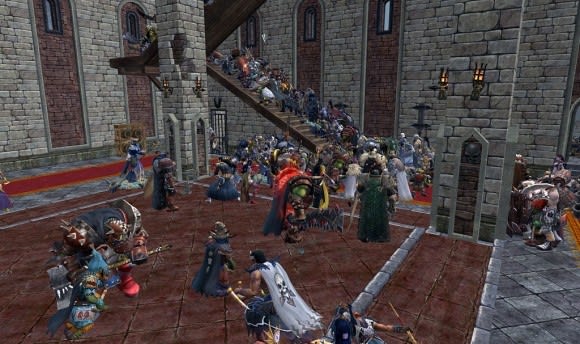 Some things in life are so regular as to be dependable: the eruption of Old Faithful at Yellowstone, the frenzy of Black Friday shopping, and a Mythic developer Q&A Ventrilo session when a new patch goes up on the test server. Following a similar Q&A session from a week ago, Mythic devs returned to chew the fat with Warhammer Online players about anything and everything under the virtual sun.

Mythic's Carrie Gouskos, Nate Levy and Mike Wyatt fielded a large range of questions, from class balancing to destructive environments. A lot of focus was given to the upcoming 1.4.X patch, the next major step for the game. Mythic was coy about topics like player housing and improved crafting, offering up a "no comment" when the devs were asked about them.

One player wondered if fortress sieges would ever return, to which Mike replied: "Hopefully, at some point. There's a lot of problems with how we would like to implement it, usually with population density and the server not being able to handle the load. So we're looking at ways to bring them back in some fashion, at some point."

The full transcript is available at Gaarawarr Gabs.
In this article: bioware-mythic, black-friday, carrie-gouskos, ea-mythic, fortress-siege, mike-wyatt, mythic, Mythic-Entertainment, nate-levy, old-faithful, q-and-a, vent, war, Warhammer, warhammer-online, yellowstone
All products recommended by Engadget are selected by our editorial team, independent of our parent company. Some of our stories include affiliate links. If you buy something through one of these links, we may earn an affiliate commission.
Share
Tweet
Share
Save