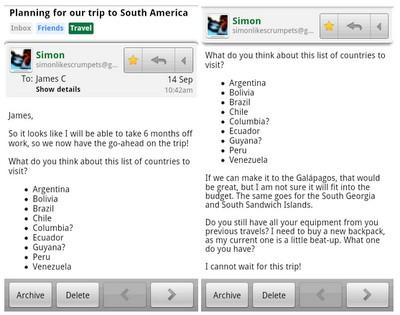 We've always said the native Gmail app is one of the best parts of Android, and it just got even better: it now supports Priority Inbox, has a "show quoted text" button, and features a floating message actions toolbar like the browser-based mobile Gmail webapp. The bigger news, though, is that Google's releasing Gmail directly to Android Market, where it'll be a separate download that can be revved with new features independently of Android itself. That's a pretty great move, as anyone still waiting for a carrier-approved Froyo build can attest, but there's irony afoot: the new Gmail won't run on anything less than 2.2. Wah-wah.
In this article: android, android market, AndroidMarket, e mail, e-mail, EMail, froyo, gmail, gmail app, GmailApp, google, mail, market
All products recommended by Engadget are selected by our editorial team, independent of our parent company. Some of our stories include affiliate links. If you buy something through one of these links, we may earn an affiliate commission.