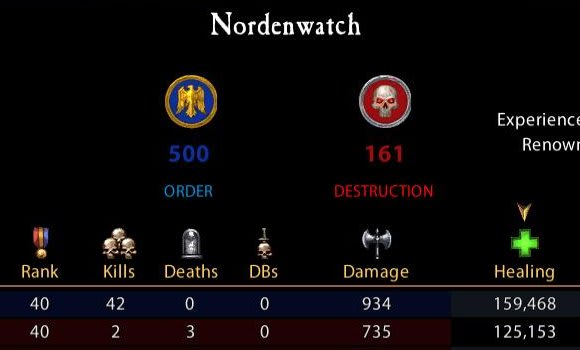 PvP in MMO games often comes with a whole slew of ill-defined requirements for balance. As impossible as such a thing is, we often hear the mating calls of noobies everywhere, sounding out their ineptitude with words like "overpowered" or "nerf." Those same types of players can often be found asking questions like, "What is the best class?" as if by some chance, they'll cheat the very system of balance they yearn for when they cry about every defeat they suffer at the hands of class X. In that respect, I can't blame them, either. Oftentimes I've found myself looking for a channel through which to vent my frustration or expressing my nerd-rage by disconnecting altogether. But you won't see me trolling forums, stating that one class has more power than another. I might take part in discussions of parity -- maybe. I can probably even be found taking part in debates of factional equality -- sure, in a theoretical sense, why not?

But realistically speaking, balance in PvP is just an ideal. It is little more than a philosophical illusion to be debated but never fully realized.

Follow along after the break as I discuss the sheer absurdity of balance in a PvP game.

Understanding PvP from a classical perspective

When Sirlin writes about what it means to be a "scrub," I am reminded of all the times I would have won a fight if it weren't for my opponents' timely use of healing potions. In those moments, was I the "scrub" for not thinking of using one myself, or was I simply out-played and beaten by a more resourceful player? In my defense, it isn't as though I'm opposed to the use of healing potions, as I've used them many times myself to gain an upper hand. As such, I think calling me a "scrub" in those situations is a bit over-the-top. I just wasn't playing to win. Players who find they constantly abuse words like "gankers" as an excuse to avoid PvP might want to take a second look, though. You might be precisely the type of "scrub" Sirlin talks about; simply by virtue of the rules you create and play by in the games you roam.
The rules of PvP: Fairness, equality and timing

To say that there are (or should be) rules in PvP only serves to underline the absurdity of the concept in the first place. Rules imply balance. However, there are some consistencies that I've noticed in my time as a PvP player, consistencies that resemble a loose set of guidelines to always keep in mind when engaging in PvP. These rules even apply to those macrocosmic, instanced situations when even-numbered teams fight on carefully constructed battlefields. For every war, there are several smaller battles, and those battles conform to the following rules:

Rule #1: There are no rules. PvP is an unwieldy thing, like a 50-pound battle-axe to a toddler -- no matter how you approach it, it just won't swing the same way twice. The entire situation is rooted in silliness, and any supports designed to bring balance are questionable at best.

Rule #2: PvP is never fair. Fairness is simply not an option. It might be that one particular fight has you or your opponent(s) outnumbered. Your team might have some ability that your opponents do not, for example: healing. One or more of the combatants might have a special weapon or piece of armor that gives them some advantage over users of average equipment. Asking for fairness would probably sound like the toddler from Rule #1 if he were crying about the weight of the weapon.

Rule #3: In PvP, there is only one choice. Ultimately, every PvP battle has the same outcome. There is a winner and a loser. There are no "tie games" in PvP. It just doesn't work that way.

Rule #4: There is never a good time for PvP. PvP can (and often will) happen at inopportune times for one side or the other. Whenever possible, one side will try to gain the advantage of surprise, as an unprepared opponent is an opponent who is more easily subdued than one who is ready for you. Doing so is not an act of malice or a sign of any intention to bring grief. It is a strategically sound path to victory (see Rule #3).

The task of balancing the peripherals: Technology, players, and environment

Outside of the game, there are far too many factors to take into consideration for something like balance to be a realistic issue. Take, for example, the machines used by two players fighting in PvP. The nature of computer hardware, especially for PCs, tells us that the chance of those two players' using identical rigs is very slim. For the sake of argument, let's assume that we're able to convince thousands (or even millions) of MMO players to use the exact same hardware. Again, not likely, but since we're talking in the realm of absurdity anyway, we can assume such a thing is possible. As soon as we negate technological variance, the players themselves become the very thing that balance seeks to regulate. And even if the governments of the world today were able to achieve such frightening conformity that would make even Orwell or Huxley shudder with disgust, we would have to alter the very nature of our relationship with the internet and our connection to it in terms of the environments we seek to arrange around ourselves when we play. Only by doing so could we ever hope to eliminate excuses like "I wasn't ready; my cat was on fire" or "You only won because the flow of my ki was blocked by my poor feng shui arrangement."

The task of balancing the software: Game code, mechanics, and classes

It's hard to imagine the responsibility of game developers to author and enforce balance. To have their art so constrained is tragic. To limit the very product of their raw imaginations by code-written business layers must be a nightmare of use-cases and risk evaluations. And even then they can only describe the universe within which the PvP games will be played in terms of matrices and the kind of linear algebra that would make most college calculus students blush with naïveté. The code required to draw a simple 3-D cube is complex enough -- try animating an entire sculpted character through a single sword swing and then keep it in time with some arbitrarily defined global tick mechanism so that Joe the Warrior isn't "overpowered" compared to Sally the Rogue. Calls for the nerf-bat mean little more than a few tears to the average player, but for a developer, the implication that some aspect of his vast, interconnected systems of object classes, structures, and inheritances is imbalanced is itself a deep, dark, dank dungeon of syntax errors and segmentation faults -- beasts to be vanquished by no less than the bravest of level 34 Debuggers.

The impossible task of balancing PvP

As a result, what we're left with is a game played by players who enjoy being competitive. Those who can enjoy a PvP game do so with the understanding that all is not as simple and clear-cut as a spreadsheet filled with pre-calculations and double-rainbow colored borders. PvP is ruled just as much by uncertainty as it is by randomness. And I think that is what makes it so fun. It isn't the need for balance, but rather the absolute lack of it. With all the variables in place, only the roll of some unseen dice can truly settle the score. But for me, the thrill of PvP goes beyond mere competition. The fun is in the excitement of winning. Or even in the lessons taught by defeat. There is no greater joy than knowing that somewhere out there exists someone bigger, tougher, stronger, more frightening, or smarter than I am. In PvP, there is always room for improvement. And that's just the way I like it.

Everyone has opinions, and The Soapbox is how we indulge ours. Join the Massively writers every Tuesday as we take turns atop our very own soapbox to deliver unfettered editorials a bit outside our normal purviews. Think we're spot on -- or out of our minds? Let us know in the comments!
In this article: 1984, aldous-huxley, apple-commercial-1984, Apple-computers, balance, brave-new-world, commercial, featured, feng-shui, george-orwell, nerf, noobie, opinion, orwell-1984, overpowered, pvp, rules-of-pvp, scrub, Scrubs, sirlin
All products recommended by Engadget are selected by our editorial team, independent of our parent company. Some of our stories include affiliate links. If you buy something through one of these links, we may earn an affiliate commission.
Share
Tweet
Share
Save