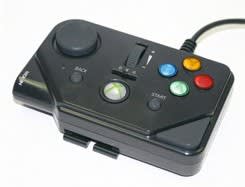 Talk about just in time. With merely weeks to go before Mr. Claus makes his wintry journey 'round the globe, Mad Catz has decided to finally ship a peripheral that was introduced way back in June. Without a doubt, the MIDI Pro adapter is one of the more intriguing music game accessories to hit the open market, enabling Rock Band 3 owners to use most MIDI keyboards and drum sets with the title. The box is shipping as we speak for Sony's PS3 and Nintendo's Wii, and the Xbox 360 variant should be headed to Best Buy in the coming hours. If you'll recall, this guy's also designed to work with the forthcoming Rock Band 3 Squier guitar / controller, and it even features a velocity sensitive adjustment for MIDI drums designed to reduce cross-talk during play. At $39.99, it's a no-brainer for those who already own a MIDI instrument or two, but we just might be more excited about the hacking possibilities than anything else. DIYers, get at it! Mad Catz® Announces Shipping of the

Shipping now on PlayStation®3 and Nintendo® Wii™ video game platforms, with the Xbox 360® version expected to ship imminently to Best Buy (limited quantities available) the MIDI PRO-Adapter has been designed exclusively for use with Rock Band 3, and allows musicians to use most real MIDI keyboards and MIDI drum sets when playing the game. In addition, the MIDI PRO-Adapter will work in conjunction with the forthcoming Rock Band 3 Squier by Fender Stratocaster Guitar and Controller, a fully functional, full-sized, electric guitar with strings that also functions as a game controller for Rock Band 3's innovative Pro mode game play.

Plugging directly into the console via USB, the MIDI PRO-Adapter works as an interface between the console and MIDI instrument, converting the MIDI messages into console controller data which the game translates into on-screen action. The MIDI PRO-Adapter features a velocity sensitive adjustment for MIDI drums designed to reduce cross-talk during play. A full D-Pad and standard gaming controller buttons are located on the PRO-Adapter to deliver seamless console integration and navigation of the game menus. The MIDI Pro-Adapter ships with a removable clip which allows gamers to attach to a belt or rest on a table top or similar flat surface.

Darren Richardson, President and Chief Executive Officer of Mad Catz commented, "The Rock Band 3 MIDI PRO-Adapter bridges the gap between music rhythm games and performing on real guitars, keyboards and drums. Aspiring musicians can learn to play an instrument and veterans can enjoy Rock Band 3 with actual MIDI musical instruments. When used with the Squier Guitar and Controller, MIDI keyboard or drum set, we are confident that the MIDI PRO-Adapter will prove a hit with Rock Band fans of all skill levels."

Featuring an impressive 83-song setlist and access to more music than any other music video game, as well as innovative new gameplay modes and instruments, Rock Band 3 will change the way fans think about and play music games. Developed by Harmonix, the world's premier music videogame company, published by MTV Games, and distributed by distribution partner Electronic Arts Inc. (NASDAQ: ERTS), Rock Band 3 is available in North America, Europe, Australia, New Zealand and other territories for the Xbox 360® video game and entertainment system from Microsoft, PlayStation®3 computer entertainment system, Wii™ home videogame console from Nintendo, and Nintendo DS. Rock Band 3 is compatible with all Rock Band and The Beatles: Rock Band peripherals, as well as most third-party instrument and microphone controllers. Mad Catz is the official peripheral manufacturer and distributor for Rock Band 3 game controllers.