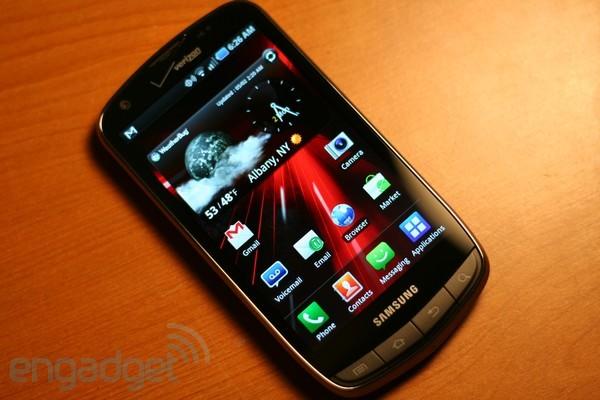 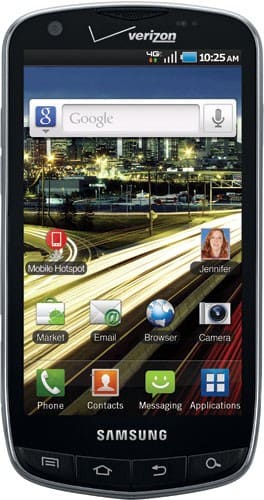 We're still shaking our heads and sighing longingly at the performance of Samsung's Galaxy S II, a phone that wowed us in Europe but likely won't be coming to American shores for some time -- and who knows what it'll look like when it does. But don't get too down, dear reader, because here comes another slice of Samsung and this slab has that same 4.3-inch Super AMOLED Plus display tucked in there. It's a little less slim, a little less classy, and a little less quick than Sammy's latest world-conquering wunderphone, but the LTE-equipped Charge is a proper contender in its own right. Read on to see why. How would you rate the DROID Charge?
We want to hear what you think. Post a quick review now to join the conversation!
Write a review

The Droid Charge is definitely a bit of a handful, as you'd expect with its 4.3-inch, 800 x 480 display. Still, we wouldn't call it a big phone by today's standards. It's .46-inches (12mm) at its thinnest, though it swells slightly in a little flare at the bottom (out to about 14mm). That's in the same ballpark of the recently-released Thunderbolt, which we're thinking many people will cross-shop this with. The Thunderbolt comes in at about .52-inches (13mm) thick, but the taper and profile on the Charge makes it seem thinner.

It's considerably lighter, too, 5.04oz (143g) versus 6.23oz (177g), though that relative lightness comes at a cost: a somewhat plasticy build. It certainly doesn't feel as bad as that Samsung flip-phone you had back in 2002, the one you rocked until your dog got ahold of it, but compared to the metal and unibody offerings seen elsewhere the Charge lacks any feeling of prestige in the hand.

It doesn't feel bad; there's a comfortable taper about it, a little bulge at the bottom that shifts the center of balance of the phone downward toward the center of your palm when holding it. It's quite comfortable to hold, helped by the smooth, glossy back that, sadly, seems a bit prone to scratches. There's a small grille on the back. Throw the phone in speakerphone mode and the voices of whoever you're speaking with come through loud and clear -- stress on the loud bit. Overall call quality and audio quality was good.

When in the hand, screen forward, power button on the right side and the volume rocker on the left fall to fingers quite readily. But, and here's something of a shocker, those aren't the only physical inputs here. On the phone's chin, which is designed with a hint of a pointy goatee, you'll find four honest-to-gosh buttons. Touch them and they actually depress! Some might call this a dated throwback to the olden days of cellular telephony, others will quite appreciate their presence. We like them, though we do wish they lit up a bit brighter.

The buttons may be a bit dim, but there are no issues with brightness on that display, which again is 4.3-inches of Super AMOLED Plus goodness. Resolution is not jaw-dropping at 800 x 480, though the contrast is. Blacks are, naturally, perfectly black and the brights are borderline blinding in a darkened room, while viewing angles are unlimited. Even outdoors in the screen is quite readable. We had no problem composing shots when the sun finally broke through the clouds and lit up our weekend.

However, color reproduction can leave a bit to be desired. On the default, automatic-brightness settings, white sections of the display instead fall toward green. Remove that toggle, dial up the brightness and you get far more pure shades -- just make sure you squint a little before popping on the display in a dimly-lit area. The color-tweaking feature found on the Galaxy S II? Sadly not here, though the display is still mighty impressive even without.

The Charge is sadly not a member of the dual-core militia, but despite its 1GHz Hummingbird internals we found it to be quite responsive. You know, snappy. It won't blow your mind with ridiculous benchmark scores but, more importantly, it never left us waiting. In fact benchmark scores were something of a mixed bag, leaving us unconvinced that they're correctly reflecting the performance of the phone. Quadrant delivered scores around 1,000 and Linpack 13.8 MFLOPS -- on the poor side. Neocore, meanwhile, managed 56.8fps and Nenamark 45fps, while the Sunspider Javascript benchmark completed in a respectable 6,194ms. Again, most importantly the phone feels quick to use -- it's no Atrix, but it's certainly on par with the Thunderbolt.

When it comes to battery life, there's no competition. The Charge blitzed through a full day of what we'd consider typical use, coming off the charger at about 9am and not getting slotted back in again until 9pm the next night. Yes, you read that right, two working days of what we'd consider average use with GPS and WiFi on, taking pictures and videos, all powered by a single 1,600mAh battery. Granted, we weren't running our performance benchmarks at the time, but we were hammering the LTE antenna to get some speed results.

And what results they were! On LTE we managed a maximum download of 15.1Mbps down and 3.9Mbps up, enough to shame your average cable modem. And those with lots of friends (or lots of tablets) can share that connection with up to 10 devices.

Oh, and in case you're still worried about the GPS performance of your Sammy handset, fear not. The Charge didn't exactly impress us with its geolocation abilities, occasionally struggling to find a lock when in an occluded area, say on a porch or inside near a window. However, once in the clear it found enough orbiting birds in the sky quickly and accurately.

The Charge comes with Android 2.2 Froyo installed and, yes, that's a bit of a disappointment in these days of Gingerbread, but the light customizations applied here by Samsung help to keep it looking somewhat fresh. The phone's lock screen has you dragging a puzzle piece to get access to the main OS, though missed calls and other events will pop up here and, if you put them in their place, you'll be taken right to whatever event caused them to appear in the first place.

A healthy seven home screens are on offer, and pinching on any of them zooms you out to see them all from high, high above. By default the middle one is your go-to screen, but you can choose any of them to take that place. Samsung adds a few custom widgets to the mix, but nothing too mind-blowing, like a dual-clock that will tell you what time it is at home and afar, plus a task manager widget that's handy if you think you're better at memory cleaning than Android.

The cool accelerometer-augmented gestures for zooming and moving on the Galaxy S II are sadly not here, however there are a number of inclusions here that are rather less wanted -- a huge amount of icons for bloatware and game demos that cannot be removed. They're not exactly filling the phone to capacity, but having three full pages of apps on your phone the first time you boot it up seems a bit excessive.

Out through a little chrome highlight on the back of the phone peers what we believe is the same eight megapixel sensor that earlier impressed us on the Galaxy S II. It impresses us here, too, capturing bright, clear images even when lighting conditions are less than optimal. Tap-to-focus quite naturally works, but we were pleasantly surprised to find that the camera used auto-focus when capturing video.


The payback is a little bit of focus noise injected into your footage, a sort of tapping you can hear in the sample above, but we didn't find it to be too obtrusive. However, the auto-focus is a bit slow, so we still preferred manually focusing by tapping. Video quality is again quite good, not quite the 1080p stuff that the Galaxy S II can deliver, but there's only so much you can do with a single core processor.

The Droid Charge is a total sleeper. We'll be perfectly honest that we weren't expecting to be wowed but, well, we're certainly impressed. In terms of performance it's more or less on par with the recently-released Thunderbolt, but battery life is far superior and, while the Super AMOLED Plus display has its quirks, we think they just add character. The imaging sensor 'round the back is top-notch and, overall, this is a very good phone. The only real disappointment? A plastic design that probably will be looking a bit rough after a few months in your pocket.

And then there's the cost: $300 on-contract puts the 32GB Charge in an unfortunate tie for the position of Verizon's most expensive smartphone. That tie is, of course, with Apple's 32GB iPhone 4. That's $50 more than the Thunderbolt, which also comes with the same number of gee bees. Worth the extra? Given the battery life and display improvements here, we'd be inclined to say yes.

In this article: amoled, android, android 2.2, Android2.2, charge, droid, droid charge, DroidCharge, feature, featured, features, froyo, hummingbird, review, samsung, super amoled, super amoled plus, SuperAmoled, SuperAmoledPlus, verizon, verizon wireless, VerizonWireless, video, vzw
All products recommended by Engadget are selected by our editorial team, independent of our parent company. Some of our stories include affiliate links. If you buy something through one of these links, we may earn an affiliate commission.
Share
Tweet
Share