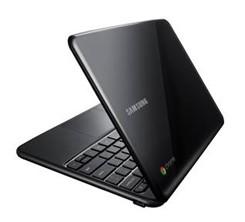 After Samsung released its Series 5 Chromebook, lots of you said you'd buy it -- if Sammy slashed the asking price in half. Well, we're not there yet, but the company did just unveil another WiFi-only version, this time with a more palatable MSRP of $349 and a slightly tweaked version of Chrome OS to match. (It has a black lid, too, in case that snow white number was too precious for you.) To recap, it has a bright, matte 12.1-inch (1280 x 800) display, a dual-core Intel Atom CPU, two USB 2.0 ports and a memory card slot. And design-wise, at least, it's a step up from most netbooks, with a comfortable keyboard and surprisingly solid 0.8-inch-thick chassis. In any case, if you were planning on picking one up for the Chrome OS lover in your life (or, you know, the low-tech person who only ever uses a web browser anyway), it's on sale now at the likes of Best Buy, Amazon, NewEgg and Tigerdirect.

What:
Just in time for holiday giving, Samsung is introducing a Piano Black version of its WiFi-only Series 5 Chromebook. At a price of $349, the updated Series 5 is even more giftable than the original.

Chromebook, based on Google's Chrome operating system, is designed to provide people a faster, simpler and more secure computing experience. Due to automatic software updates, Google has continued to release new features and improvements on an ongoing basis. These new features coupled with the Samsung design aesthetic creates a technology device that gets better over time, offering the best possible web experience in one device for the internet-enthusiasts in all our lives.

Fans in the New York City-area can test drive the Series 5 Chromebook at the Samsung Experience at Columbus Circle and even borrow one for up to seven days to get a feel for the device.

Where:
The new Series 5 Chromebook is available now at BestBuy.com, Amazon.com, Tigerdirect.com and NewEgg.com. For a full list of availability call 1-800-SAMSUNG or visit www.samsung.com.

In this article: Chrome OS, Chromebook, Chromebooks, ChromeOs, laptop, laptops, Samsung, series 5, series 5 chromebook, Series5, Series5Chromebook, ultraportable, ultraportables, wifi only, wifi-only, WifiOnly
All products recommended by Engadget are selected by our editorial team, independent of our parent company. Some of our stories include affiliate links. If you buy something through one of these links, we may earn an affiliate commission.
Share
Tweet
Share