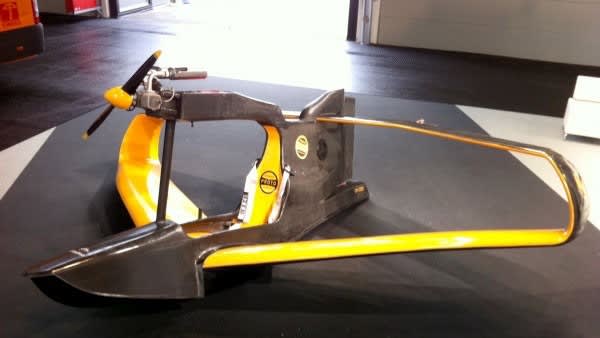 Since the dawn of time, man has dreamed of soaring through the clouds, without invasive TSA security checks and having the guy next to him fall asleep on his shoulder, drooling. FlyNano debuted three new planes at last week's Aero 2011 show in Friedrichshafen, Germany, which it hopes will deliver that very dream. Thanks to a composite carbon fiber bodies and a sub-44 pound drive trains, each weighs less than 154 pounds, hitting the FAA definition for an ultralight vehicle and forgoing the need for a pilot's license. But, while the company is pitching these electric-powered propeller vehicles as flyable straight out of the box, the things are still subject to FAA regulations, so don't expect to go joyriding near a major airport anytime soon -- and then there's the "theoretical operational distance" of 40 miles to contend with. Pricing ranges from €25,000 to €27,000 ($36,380 to $39,290) and the company claims that they'll start shipping in three months, plenty of time to get your life insurance premiums paid up.

Man Was Born To Fly
10 years ago, aviation consultant, flight designer and enthusiastic pilot, Aki Suokas, first dreamed of a radical new flight design that would weigh less than 70 kilos, including a drive train under 20 kilos. That magic weight limit determines how a new plane is legally classified.

The FlyNano single-seat fun flyer is now in the air, and will be officially launched at Aero 2011 at Friedrichshafen, Germany, 13 – 16 April. Aero is Europe's premier aviation event. FlyNano comes in 3 basic variants: the electrically-powered series E 200, a petrol-powered Series G 240, and the uprated racing models Series R 260/300.

The FlyNano is extremely light thanks to innovative Finnish design solu- tions and an advanced carbon fibre composite construction. Wingspan is nearly 5 meters, nose to tail 3.5 m, and height 1.3 m. Maximum take off weight is 200 Kg. Speed range 70 – 140 km/h with a service ceiling of 3 km. FlyNano's true airspeed is about 140 kmh at 75% power with a theoretical operational distance of 70 km.

Everyone has sometime imagined what it would be like to fly free as a bird. FlyNano is for the fun of flying – no passengers, no cargo - just you, FlyNano and the endless blue. If you've ever had a pilot's licence, or had experience with ultras or micros, you'll fly Nano right out of the box. The rest of you will need to learn the simple rules of the air. Minimum red tape – maximum fun.
Prices range from € 25.000 - 27.000 with a trailer/storage box at € 5.300.

Via: allGeek
Source: FlyNano
Coverage: Deutsche Welle, GizMag
In this article: aero, air vehicle, aircraft, airplane, AirVehicle, carbon fiber, CarbonFiber, FAA, FlyNano, germany, micro air vehicle, MicroAirVehicle, plane, TSA regulations, TsaRegulations, ultralight
All products recommended by Engadget are selected by our editorial team, independent of our parent company. Some of our stories include affiliate links. If you buy something through one of these links, we may earn an affiliate commission.