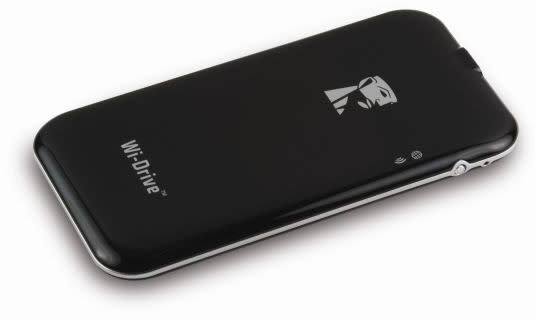 With nearly 350,000 apps and counting, the iPhone's maximum capacity of 32GB doesn't allow you to even scratch the surface of the App Store's catalog. Throw in an HD movie, some TV episodes, hundreds of tracks and a few thousand photos, and you'll be chewing through those available bytes in no time. Most manufacturers compensate this limitation by including a microSD slot for additional storage, but not Apple -- you're stuck with that original capacity until you're ready to upgrade to a new device. Luckily, for those who need more storage now and don't mind paying for it, AirStash, Seagate's GoFlex Satellite, and now Kingston's ultra-slim Wi-Drive allow you to boost gigs without upgrading, or switching to another platform. None of these pocket servers come without compromise, however -- you'll be spending over $100 for even the most basic option, while adding yet another device to your portable mix. Be the first to review the Wi-Drive?
Your ratings help us make the buyer’s guide better for everyone.
Write a review


Shipping by July 25th, the Kingston Wi-Drive is the latest entry to this budding category. The MiFi-sized device streams files over WiFi to as many as three iOS devices. The Wi-Drive works in conjunction with a free app and costs $130 for 16GB of storage and $175 for 32GB, which means it's not more cost-effective than, say, buying a higher-capacity smartphone or tablet from the get-go. But if you need to boost capacity and can't upgrade your device, or have maxed out its internal storage and are unwilling to unload some content, then you're probably a good candidate for the Wi-Drive. It could also be a good fit for a family of iOS users looking to share movies in the car or on a plane (some airlines technically forbid wireless devices in-flight, so use at your own risk). Right now, you need an iOS device and free app to use the server, though Kingston hinted that it's looking into adding an Android app in the future.

From the second you lift the lid on its iPhone-like packaging, it's clear that Kingston took cues from Apple's latest smartphone during the design process. It's about one-half inch taller than the iPhone 4 -- and just as thick. The glossy black device sports a minimalist appearance, with just a single power button and a mini USB port -- a curious choice considering a micro-USB connector would have allowed for a more svelte appearance. The drive even sports a full-length silver band along its bottom and sides, just like the iPhone 4. Our sample remained scratch-free after a few days of testing, but a pre-production model we saw during a brief hands-on last month looked like it had gotten in a bar fight with the AirStash. Regardless, you'll be connecting to the Wi-Drive over WiFi, so it should be out of sight most of the time. On that note, the drive is lightweight and slim enough to slide comfortably into a front pocket. And it shouldn't singe your jeans either -- it only gets slightly warm after two hours of continuous use.

Continuing our tour, there are two subtle LED indicators on the top right -- one representing internet connectivity, and a second for wireless activity. On the right side you'll find the tiny power button, that also glows green when on. But it's unfortunately very difficult to press, even leaving a temporary mark on our thumbs after turning on the device (tip: press with the tip of your nail instead).

Adding content to the Wi-Drive couldn't be easier. Connect the server to your Mac or Windows machine using the included mini USB cable, and it will pop up as a USB drive, allowing you to simply drag and drop compatible files. Compatibility is limited to files that can play natively on iOS, so some video types won't work. Basically, if you can drop it into iTunes to load onto your device, or access via email or the web, then you shouldn't have any issue viewing it through the Wi-Drive app.

With only a power button on the Wi-Drive itself, all settings need to be adjusted in the app. The application is very straightforward -- if you know how to launch a video or song stored on your iOS device, then you shouldn't have any trouble figuring out how to play content from the Wi-Drive. The settings menu isn't as polished as some of the other screens in the early version of the app that we tested, but you can probably expect an update prior to launch later this month. Video and audio playback screens look virtually identical to their Apple-designed native counterparts, with play, pause, volume, and scrubbing controls available during playback. Tapping the display will bring up the controls, or send them to the background. You can also double-tap a video to maximize it, on both the iPhone and iPad.

After waiting 30 seconds for it to boot up, the 802.11n Wi-Drive will appear on your networks list. Simply select the device and launch the Wi-Drive app. After the initial connection, you'll be able to access a settings page, where you can change the name of your wireless network and set a WPA or WEP security key. And what about connecting to the internet when your iOS device's WiFi is set to Wi-Drive? Luckily, Kingston didn't overlook this issue, and included a WiFi passthrough option. Once you're synced up with the drive, head over to the settings page to select the same hotspot you usually tap for wireless internet. This adds a few more steps to the process, and obviously isn't ideal when moving around since you'll need to dig through several menu levels to choose a new network, but it is a decent workaround nonetheless.

Unfortunately, we experienced slower connectivity speeds when connected through the Wi-Drive, rather than directly to a high-speed hotspot -- you'll be fine checking email and even streaming HD video, but there was definitely a significant difference (see image below). We were also able to connect a Nexus S 4G to the Wi-Drive to access its WiFi connection, though without an Android app available for content playback, there's really no reason for you to do this yourself.

Kingston hasn't rated the wireless range -- you'll likely spend most of your time within a few feet of the Wi-Drive, anyway -- though we were able to access the device and play content at a line-of-sight distance of about 100 feet. Load speeds were significantly longer at that distance, and content paused a few seconds after walking outside of WiFi range, so it's safe to say that Kingston added a buffer of several seconds to maintain consistent playback. When within a few feet of the server, videos loaded within five seconds after making a selection, and refreshed after scrubbing within a second or two. We were able to play a DVD-rip of The Green Hornet on both an iPhone and iPad simultaneously without hiccup, though you should be able to stream content to up to three iOS devices.

We did notice some bugs during extended playback, which will likely be addressed before release. The position slider and remaining time indicator froze after about 20 minutes of playback on several occasions, and we weren't able to resume video playback after disconnecting from the drive. Jumping back to the content list, reselecting content, and scrubbing ahead to our previous location was the only solution that seemed to work -- obviously not ideal.

The Wi-Drive's non-removable battery is rated for four hours of playback, but we were actually able to stream a movie for four hours and 20 minutes, at a range of one foot, and connected to only one device. As you start adding more devices, longevity will likely decrease, but we were pleased with the battery's performance during our test. Also note that streaming video over WiFi will likely also affect battery life on your playback device.

While it's the most attractive of the bunch and offers generally consistent performance, the Wi-Drive isn't your only option when it comes to portable media servers. If you're looking for much, much more storage, but don't mind compromising on size, Seagate's GoFlex Satellite portable hard drive gives you 500GB of storage for $200, and it's compatible with iOS as well as Anrdoid, through a web app (though we did experience some issues with video playback during our review). For a more bare-bones solution, the AirStash pairs with SD cards to boost your device with up to 32GB of additional, removable, swappable storage. Even with a $100 price tag, you'll still need to bring your own storage, so after adding a 32GB card you'll be approaching the Wi-Drive's $175 sticker price. There's also a new server from Hitachi called G-Connect, though we haven't had a chance to go hands-on with the $200 device just yet.

Due to both price and storage limitations, the Kingston Wi-Drive will act as a crutch for most users when it ships on July 25th, providing a temporary storage boost just until you're ready to upgrade to a new device. If you're thinking about shelling out well over $100 just to increase your iOS storage, chances are you're going to opt for a higher-capacity model the next time around, leaving your Wi-Drive to sit around and collect dust. The device is a reasonable solution for Kingston, a flash memory manufacturer that appears to be looking for some way, however obscure, to enter the iOS accessory market. Ultimately, we feel that, while a well-designed product that works fairly well, the Wi-Drive has limited appeal. If you need more storage, and need it now, then it's worth your while to consider the Wi-Drive or one of its competitors, but if you don't fall within that camp, then you're best off saving your cash, eventually opting for a higher-capacity iOS device the next time around.
In this article: apple, apple ipad, apple iphone, apple ipod, AppleIpad, AppleIphone, AppleIpod, ios, ios app, IosApp, ipad, iphone, ipod, kingston, kingston wi-drive, kingston widrive, KingstonWi-drive, KingstonWidrive, nas, preview, review, video, wi-drive, widrive, wireless, wireless hard drive, WirelessHardDrive
All products recommended by Engadget are selected by our editorial team, independent of our parent company. Some of our stories include affiliate links. If you buy something through one of these links, we may earn an affiliate commission.