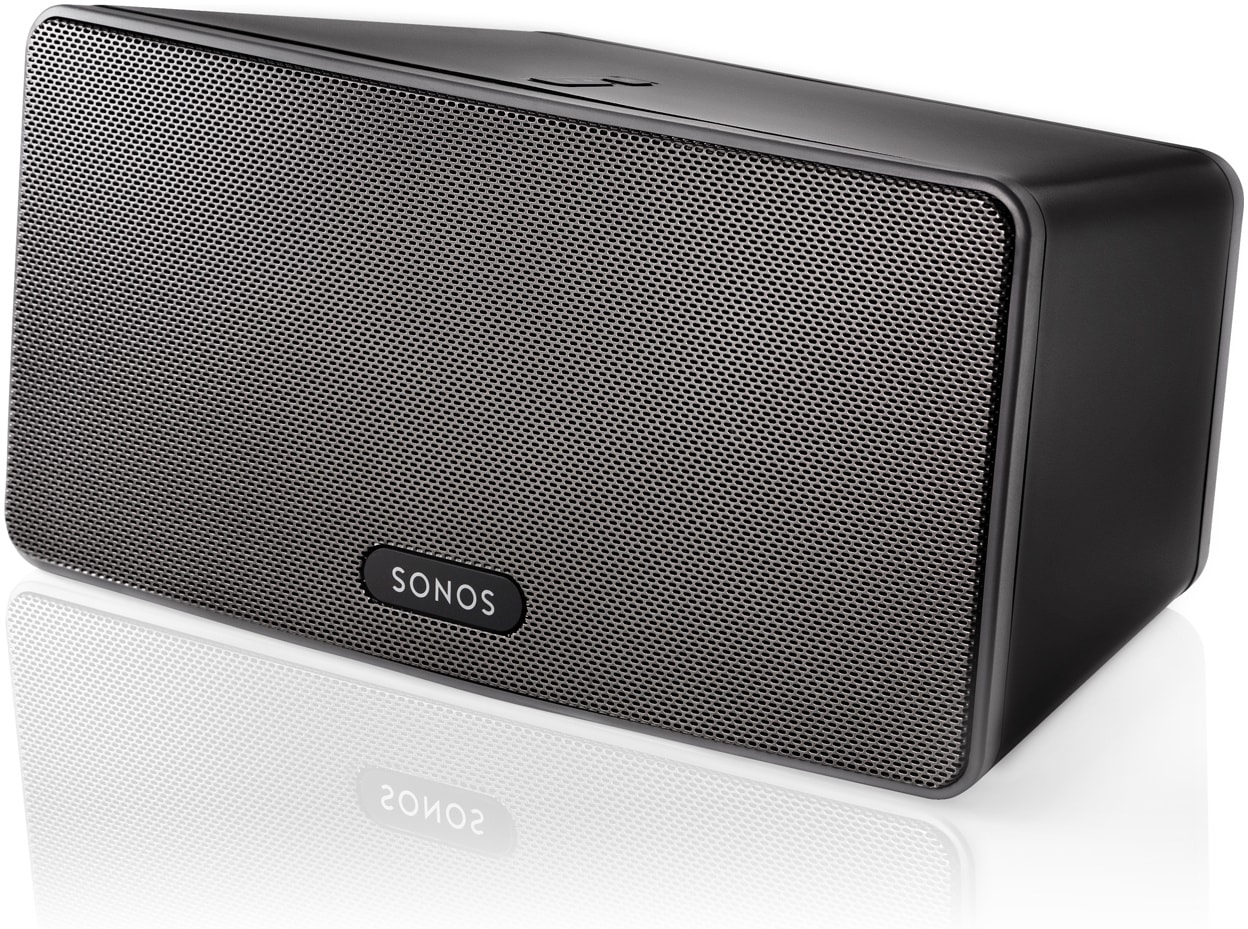 Sonos may not inspire the sort of high-end audio lust that a company like Polk can, but it doesn't draw the ire of serious audiophiles the way Bose does either. It straddles a fine line between respectability and gimmicky, and rightfully so -- Sonos isn't really an audio company in the purest sense of the term. Rather than loading up its components with vacuum tubes and gold-plated connectors, units like the recently launched Play:3 make their mark by incorporating wireless streaming -- a feature that's actually painless to setup. They're for people who have embraced the digital music revolution, but don't want to be stuck sitting in front of the computer or tethered to an iPod when the mood to groove strikes. The Play:3 also happens to be the first accelerometer-packing speaker we've ever tested that dynamically changes the EQ based on its orientation. As usual all the details -- from connecting and controlling the player to whether or not it produces the sound quality to justify its somewhat lofty $299 price tag -- are after the break. How would you rate the Play:3?
We want to hear what you think. Post a quick review now to join the conversation!
Write a review

The Play:3 itself is pretty nondescript, as you'd expect most home audio equipment to be. The slightly curved speaker grille up front is emblazoned with a small Sonos logo and masks the trio of speakers inside. Most of the body is covered in smooth black or white plastic (your choice) that tapers off slightly towards the rear and is only interrupted by the volume rocker and mute buttons. Around back is another grille, which protects the rear-firing bass radiator, an Ethernet jack, and a power cord. The Bridge, which connects to a router and serves as the wireless hub of a multi-Sonos speaker setup, is just as unassuming. Roughly the size of an Apple TV, its glossy white plastic body sports a logo and a "join" button, while around back is a pair of Ethernet ports and the jack for the power adapter. There's nothing that makes either unit stand out visually, which is generally what you want from your home entertainment devices.

Sonos has always prided itself on ease of use, and we're happy to report that nothing has changed in that department. Getting a Sonos Bridge connected and firing up a pair of Play:3s at either end of our apartment took only a matter of minutes, and most of that was spent waiting for the Sonos Controller software to install. Once that was done it walked us through the setup process, which involved pressing the "join" button on the bridge, then the mute and volume up buttons on the two wireless speaker units. Seriously -- that's it. From there it was just a matter of pointing it to our music folder and punching in our Pandora and Spotify credentials. From zero to M83 in five minutes flat.

When it comes to actually picking out tunes, Sonos is a little less intuitive. Now, that's not to say the Controller software or mobile apps are useless, but they do have a number of niggling little quirks that make them occasionally frustrating. Since you can't simply beam your iTunes to the speakers, you have to use the Sonos software as a music manager. Look, the last thing we need is yet another program to contend with, much less one that makes iTunes seem like an absolute dream come true. The left pane of the Sonos Controller shows your connected devices, while the middle is dedicated to your queue, the player controls, and a now playing panel. That leaves all of your music selection options jammed in a single column on the right-hand side. You can scroll through an alphabetical list of your tunes organized by track name, album, artist, or genre which, with our 280GB library, was overwhelming no matter how you sliced it. There is a search option, but it's not search-as-you-type, a trick even the Android music player can pull off.

Strangely, the mobile Sonos remote app does have search-as-you-type, but it still leaves a lot to be desired. The Android version is easily confused by things like spaces in an artist name or it simply doesn't show results that we knew for a fact were there. Sonos must know how lackluster the search performance is -- it's the only thing that can explain why the company has made it so cumbersome to use. Depending on where you start from in the app, searching for an artist is a minimum four-tap affair. From the "now playing" screen first you have to tap the music button in top right-hand corner, then select music library, then search, then artists. That's right, searching for artists, albums, and songs are three distinctly different actions in Sonos. And you can press the search button on your phone all you want, it doesn't do a darn thing. Things are slightly better on the iPhone front, where the buried search feature actually works, but it still suffers from the same strange design issues (read: lack of a progress bar) as its Android counterpart.

Selecting music in both the mobile app and on the desktop is also slightly jarring. All music is added to your queue, so you're not actually navigating from artist to artist or album to album. This is particularly confusing when you select a track from an album and, when it's over, you're greeted with only silence. It doesn't automatically move on to the next song. On the desktop app selecting an entire album requires you to either select the album title then move down to the "play now" button (double clicking just expands the entry to show individual tracks) or right click to select the entire collection.

It's not all bad news, though. For one, the desktop indexed our rather sizable library in less than half the time it took iTunes, and didn't even screw up any of the metadata either. We also love that your queue and Sonos playlists are source agnostic. You can easily switch back and forth between music stored on a NAS box, your PC, and streaming selections from the likes of Spotify without missing a beat -- a great feature for building that perfect party mix without dropping tons of cash on iTunes.

Even if the software components were the easiest-to-use music management tools ever, it wouldn't mean diddly squat if the speakers sounded like those two-watt jobs built into your LCD. Thankfully, if you can cope with the cumbersome controller applications, you'll be treated to some surprisingly rich sound for something so small. At less than six inches tall and under six pounds you wouldn't think that the Play:3 could get so loud, but it could easily be heard throughout an approximately 700 square-foot apartment. In fact, the two blanketed our place with the forlorn notes of Clarence Clemons' solo on Jungleland without having to be cranked all the way up.

It's better that we didn't have to turn it up all the way too. While the clarity of the sound was impressive at lower volumes, the bass does get a little muddy when the slider is pushed all the way to the right. This is primarily due to the fact that, unlike its big brother, the Play:3 lacks a dedicated subwoofer. But, its pair of three-inch mid-range drivers and tweeter delivered sound that's a step above your average iPod dock or all-in-one stereo system. The default EQ is a little bassy for our tastes (a trick usually used to cover up lackluster sound quality), but turning it down a notch or two produced a much more balanced tone.

Obviously, with three speakers jammed into a roughly six-inch wide enclosure there isn't much in the way of stereo separation. Some clever sound processing can compensate a bit, but for true two-channel audio you'll have to team up a pair of Play:3s. It's actually pretty easy to do -- just select "Create Stereo Pair" from the ZonePlayer settings menu. The improvement in sound with the two connected was dramatic to say the least, especially after they're turned on their sides. Thanks to the built-in accelerometer, flipping the units triggers an EQ change that's more appropriate for delivering right and left channels individually. Of course, at $299 each, you'd be spending quite a lot of money for a system that sounds good, but not $600 good. Ultimately, creating a stereo pair is a neat trick, but not really a selling point. Even if you purchased two Play:3s, chances are you wouldn't waste your cash by placing them in the same room. Sonos is all about wireless streaming, and there's no point to being able to access your tunes anywhere in your home if all your speakers are within six feet of each other.

If you can stomach the price -- the pair of Play:3s and Bridge we tested add up to a $650 receipt -- it's hard to argue with the combination of sound quality and simple installation a Sonos system provides. The Play:3 is more than adequate for casual listening. It's clear, loud, and punchy enough to start up a small dance party if need be. And, unless the units unpacked themselves, sprouted legs, and walked to where we wanted them, setting them up couldn't have been any easier. The software controls did leave us scratching our heads, and occasionally swearing through gritted teeth. Which is a shame because if they felt a tad more polished, we'd probably be more than willing to overlook the somewhat inflated sticker price.