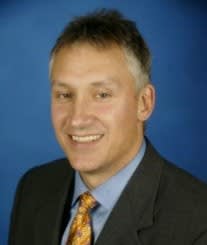 Nokia's US prexy Chris Weber's been making the media rounds lately, talking up the company's Windows Phone near-future and offering a peek at the marketing blitz to come. In an interview with VentureBeat, Weber confirmed the death of Symbian and the N9's North American release, but was much less straightforward when asked about the WP7 launch, saying only that a US focus is paramount to the OEM's global success. The MS-blessed smartphones are set to debut "in volume" next year, at which point Nokia hopes to have ironed out its complex negotiations with carriers, bringing aggressively subsidized handsets to market. Nokia's chief also engaged in a bit of mobile OS grandstanding, touting Microsoft's live tile integrated approach as superior to the "outdated" app focus popularized by iOS and Android. And if you're wondering just how the OEM plans to differentiate its hardware in this cluttered wireless market, expect to see phones with an emphasis on "state-of-the-art imaging technology and battery performance." Here's to hoping Weber's words don't come back to haunt him when his bet goes live next year.

Via: Slashgear
Source: VentureBeat
In this article: Android, Chris Weber, ChrisWeber, handset, handsets, iOS, launch, Microsoft, mobile, MS, N9, Nokia, Nokia N9, Nokia Symbian, Nokia WP7, NokiaN9, NokiaSymbian, NokiaWp7, phone, phones, Symbian, Windows Phone, Windows Phone 7, WindowsPhone, WindowsPhone7, WP7
All products recommended by Engadget are selected by our editorial team, independent of our parent company. Some of our stories include affiliate links. If you buy something through one of these links, we may earn an affiliate commission.
Share
Tweet
Share
Save