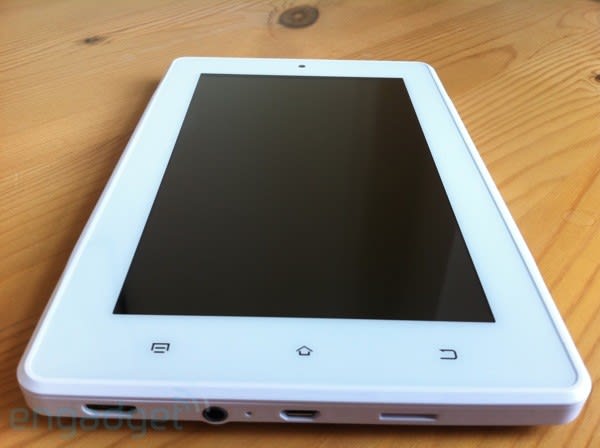 Picture the scene: you're checking your emails on a shiny new device (worth two months pay) and from nowhere, a greasy-fingered infant is screaming at you to play. Reluctantly, you pass it over, watching your own hands cup the air beneath any potential drop zone, wondering how best to explain the jam-smeared calamity to your insurance company. Then you wonder if there isn't a useful, hard-wearing and cheap device you could let them play on without fear of bankruptcy. That's what prompted Norwich-based bedding magnate Andrew Kerry to conceive the AndyPad, an inexpensive, 7-inch Android tablet he could fling at kids. It wasn't long before jealous adults were demanding their own version, so a tooled-up edition of the device called the AndyPad Pro was born.

The tablet is currently UK-only and it retails for a lot less than the Samsung Galaxy Tab 7 (£280; $345 on Amazon) and Acer Iconia Tab A100 (£273 for the 8GB version; $328 on Amazon), and HTC Flyer (£330; $499 on Amazon). What's more, Verticool, an outfit founded by a man more famous for his Mattressman chain than any interest in technology, believes it can match the competition in a fair fight. Do the electronics giants have something to fear from the bargain-basement tablet or does it promise much and deliver little? Read on to find out. Norwich-based tablet company Verticool thinks it can take on the big boys with a bargain-price 7-inch tablet. It's half the price, but half-price comes with compromises.

In the box, you'll find the tablet, a micro-USB cable, wall adapter and a pair of earbuds so large that inserting dinner plates into your ear canals would seem to be an easier proposition. The 5 x 8-inch device weighs in at 0.8 pounds (370 grams), measures 0.5-inches thick and is pleasingly chunky without feeling heavy. It also happens to be thinner than most of the other devices in its class. The only significant drawback is a creaking in the thin plastic rear shell that reduces one's confidence in its durability. The white device hides fingerprints well, though it is a veritable dust magnet. Even so, a quick wipe on the back of the sleeve will prevent people from thinking you live in a cotton mill.

In portrait mode, the power button, reset pin and speakers are on the top edge of the device, the right side houses a volume rocker and the bottom contains mini-HDMI and micro-USB ports, a headphone jack and a microSD slot. Up front is a 0.3 megapixel VGA camera and round the back, a 2 megapixel camera (in the pictures you'll see what appears to be an LED-flash beneath it; it's actually a light-sensor.) Beneath the display are three touch buttons: home, back and menu. Button placement presents a challenge when using the device in landscape -- hold it on the right and the heel of your hand will invariably catch enough of the button sensor to take you out of your app or media. Hold it on the left and you will utterly obscure the speakers housed on the other side.

Steve Jobs may think that the 7-inch form factor is "DOA" but once we learned the best way to hold the device, it was very comfortable to hold for long periods of time. The screen is large enough to comfortably enjoy full-screen apps with movies and can even fit into a pants pocket, although we wouldn't recommend you use it that way. It's sufficiently compact enough that you can even comfortably use it one-handed, as long as your fingers are agile enough.

The tablet's 1024 x 600 capacitive display has weak backlighting, which means it won't win a fight against direct sunlight. Still, it has a wide viewing angle and the matte covering won't attract fingerprints as easily as its high-gloss cousins. It handles video pretty well, with a detailed picture, good black levels and only minor colour bleaching -- well enough, in fact, that it's a worthy replacement for a similarly endowed PMP. The display supports multitouch gestures, and in most apps they feel surprisingly fast and responsive. In the home screen, specifically, the tablet became sluggish and unresponsive, giving the impression of being far slower than it actually is.

Taking the device on a train journey with a pair of high-end Radiopaq earbuds, video refused to play stereo sound correctly even after several restarts. Afterward, testing with a pair of JVC Marshmallow earbuds and a variety of cheaper pairs, the problem seems isolated, but it's worth noting that it can throw a fit with the wrong accessories. Build quality rears its ugly head when you plug in headphones -- any pressure, like a finger tap on the rear shell causes any sound you hear to be replaced by an electrical buzzing.

On the back is a 2 megapixel camera, which provides reasonable shots and a 0.3 megapixel VGA lens for video chatting on the front. Sadly, none of the bundled apps, nor Skype can take advantage of the camera and only Fring was able to do anything useful with the snapper. Again, this is a software issue that should have been addressed before the device went on sale. At least you can get away with not putting any makeup for a video chat, it's highly unlikely anyone will notice. The company rates battery life at six hours, and in our test (WiFi on, Bluetooth off, video looping) it actually went over that benchmark by a few minutes, which was a pleasant surprise. Six hours of battery life puts it in the same ballpark as the Galaxy Tab 7 and you feel as if this could go a full day, maybe two, without a recharge if it's only being used casually.

We can't be as effusive about the general performance of the device. Running the show is a Rockchip RK2918 Cortex A8 1.2GHz with 512MB RAM, and while it's a budget chip, it's no slouch. In general, apps run smoothly and video playback is fluid. Punctuating it all, though, is that lingering annoyance with the home screen, where performance slows to a crawl. Button pushes and swipes take far too long to register, and the icons have a habit of disappearing momentarily. It's worth repeating that the home screen's lagging performance makes a poor impression, even though it's otherwise an adequate performer.

The AndyPad Pro runs a barely-modified version of Android 2.3 (Gingerbread), Swiftkey X replaces the standard Android keyboard as default, although the split layout in landscape mode takes some getting used to. Aside from Dropbox, Evernote and Facebook, the majority of the apps are free or demo versions of popular Android market games (Chess, Drag Racing, Checkers, Four in a line, Glow Hockey, Mouse Trap, Move it!, Reversi, Jewels, et cetera), which at times makes the device feel cluttered and bloated. You also get Android Market access to download most anything you want.

Aside from UI tweaks, Verticool has bundled the Andy App, its own software designed to hold the hand of novice users. It can handle OS updates, install apps and includes a series of short video tutorials that explain how to use the device -- something we wish came with all devices to teach impatient relatives.

The browser contains no surprises -- nearly everything renders quickly over WiFi, apart from element-intensive sites like, erm, this one. Trying to load the desktop versions of many sites means waiting for everything to load before you can commence browsing. We expected the device to collapse at the idea of a full-Flash page like GetTheGlass.com and yet it actually ran it, nearly keeping up with the constant stream of animation that the California Milk board threw at it.

Archos debuts Arnova 9 G2 Android tablet, offers Gingerbread on a 9.7-inch IPS display
Low-cost Andy Pad tablet spotted in the wild, Andy Pad Pro said to be following
India's $35 tablet is here, for real. Called Aakash, costs $60
When reviewing an Android Tablet, the question to ask is "Why this device over another?" In this case, it's because for the price of an iPad 2, you can have two £180 ($280) AndyPad Pros with enough change left over for a meal out. It's wise to mention that UK gadget prices are substantially higher than in the US. In sterling, the 16GB AndyPad Pro is very aggressively priced: £90 cheaper than the 8GB Iconia A100 (£273; $328 on Amazon), £100 cheaper than the 16GB Samsung Galaxy Tab 7 (£280; $345 on Amazon) and nearly half the price of the 16GB HTC Flyer (£330; $499 on Amazon).

This is a device that high-end users will struggle to appreciate. Suspect build quality, fussy with accessories and the operating system all detract from the tablet's strengths. There are performance issues with the AndyPad Pro, nearly all of which can be laid at the feet of Gingerbread. The company is currently investigating porting Honeycomb onto the device. If it can achieve that and improve the build quality without inflating the price, it would be hard to justify the higher prices of tablets in the same class. Until then, this is a budget tablet that will appeal to price-watching novices only.
In this article: 7-inch, 7-inch tablet, 7-inch touchscreen, 7-inchTablet, 7-inchTouchscreen, Android, Android 2.3, Android 2.3 Gingerbread, Android Tablet, Android tablets, Android2.3, Android2.3Gingerbread, AndroidTablet, AndroidTablets, Andypad, Andypad Pro, AndypadPro, budget, Budget Tablet, BudgetTablet, Gingerbread, Gingerbread tablet, GingerbreadTablet, google, review, Rockchip, Rockchip RK2918, RockchipRk2918, Sensatouch, video
All products recommended by Engadget are selected by our editorial team, independent of our parent company. Some of our stories include affiliate links. If you buy something through one of these links, we may earn an affiliate commission.