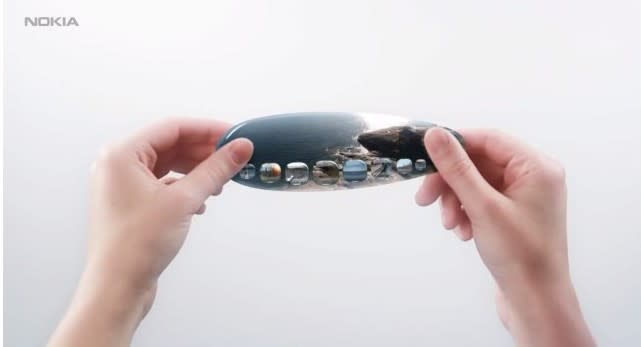 We barely recovered from Nokia's futuristic concept buffet at Nokia World, but a new video has unearthed the deceptively named Humanform. Fortunately not shaped like a dolly, this teardrop device cooked up Nokia's in-house labs supposedly uses some as-yet unexplained nanotechnology, with a bendable transparent display and a fully touch sensitive casing. The segmented design also channels some Wiimote-esque gesture features and twist controls seen on the phone behemoth's Kinetic Device. An inert Humanform shell was also on show alongside it last month, although it didn't do much aside from bending. See if you agree with Nokia's vision of the mobile future after the break.

Source: Nokia Conversations
In this article: bendable, concept, flexible, flexible screen, flexible screens, FlexibleScreen, FlexibleScreens, future, future phone, FuturePhone, gear, humanform, kinetic, kinetic device, KineticDevice, mobile, mobilepostmini, nokia, nokia humanform, NokiaHumanform, timeline16bendy, video
All products recommended by Engadget are selected by our editorial team, independent of our parent company. Some of our stories include affiliate links. If you buy something through one of these links, we may earn an affiliate commission.
Share
Tweet
Share