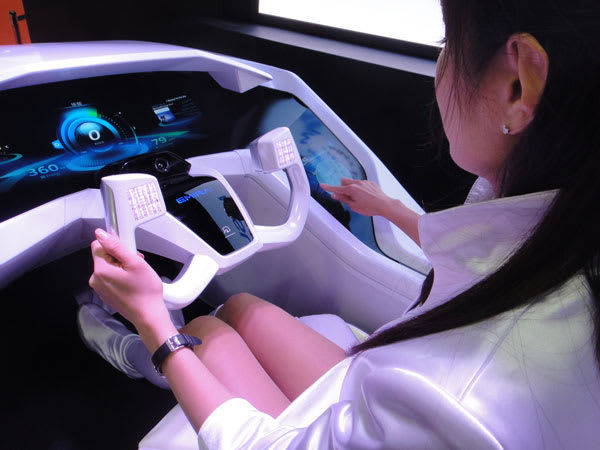 The Jetsons were a lie, people. If you want a flying car, glue a parachute to a Matchbox racer. Automotive companies like Mitsubishi Electric have a distinctly different idea about our auto future, one where we'll all be driving in a 1980s-by-way-of-2011 Tron roadster with seatback-embedded (glasses-free) 3D TVs and a big 'ol curved rear projection display. At least, that's the vision put forth by the company's EMIRAI concept, shown off at this year's Tokyo Motor Show. The demo vehicle's biggest innovation, supposedly on deck for the next decade and beyond, is its biometrically-sensitive interface, which can adjust the position of your seat based on current heart rate and facial temperature. There's also a driver side touch panel configured to recognize handwriting (Japanese, for now) and dynamically-changing buttons, mounted on the W-shaped "steering wheel," that rise and fall in correlation to the dashboard's UI. It's neat stuff, no doubt, but we'll let you go ahead and get excited at your own risk. Because until production models hit showroom floors, it's all still very much promises, promises. Check out the video after the break for a brief peek at the wheels of tomorrow.

Source: DigInfo TV
In this article: 3dTv, biometrics, car, concept, concept car, ConceptCar, EMIRAI, mitsubishi, mitsubishi electric, MitsubishiElectric, rear projection display, RearProjectionDisplay, Tokyo Motor Show 2011, TokyoMotorShow2011, video
All products recommended by Engadget are selected by our editorial team, independent of our parent company. Some of our stories include affiliate links. If you buy something through one of these links, we may earn an affiliate commission.
Share
Tweet
Share