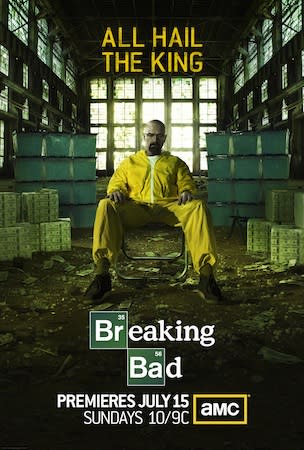 As June expired, so did AMC's contract with both Dish Network and AT&T U-verse. While negotiations continue with AT&T and its channels remain on for the moment, AMC is already firing at Dish for dropping its channel immediately (after shifting it to an entirely different channel number a few weeks ago), claiming no negotiations have even taken place. As we heard in May, AMC maintains that the real issue is a court case between the two over the Voom HD debacle. For its part, Dish is telling customers the problem is fee increases requested by AMC and "devaluing" its programming by offering it on iTunes, Netflix and Amazon.com. As a result it's swapping in commercial-free HDNet Movies for AMC, and replacing two other AMC channels, WE and IFC, with Style and HDNet (soon to become AXS TV). We'll see how these negotiations go -- it's not too bad now but let's see how viewers react once the new season of Breaking Bad starts airing July 15th.

Update: As we went live, AT&T has announced it reached an agreement with AMC Networks, so it's only Dish Network that's on the hotseat now. [Thanks, @soulfliesfree]

DISH will be providing HDNet Movies to replace AMC, and is offering Style and HDNet to replace WE and IFC.

"HDNet Movies and HDNet are exciting offerings for our customers," said Dave Shull, senior vice president of programming for DISH. "These are networks that will bring great entertainment, including first-run, commercial-free movies in high definition to our customers. DISH is the only pay-TV provider that did not raise its core package prices in 2012. We will continue to fight hard for choice, control, and value in home entertainment."

DISH notified AMC Networks earlier in the year of its decision not to renew its contract due to the channels' high costs compared to their relatively low viewership.

DISH's actions come as AT&T and AMC Networks negotiate over what AT&T this week called an "excessive rate increase."

"A significant portion of any pay-TV bill goes to fees for content providers like AMC Networks," said Shull. "AMC Networks requires us to carry low-rated channels like IFC and WE to access a few popular AMC shows. The math is simple: it's not a good value for our customers."

AMC Networks has further devalued its programming by making its handful of popular shows available to consumers via iTunes, Netflix and Amazon.com.

"One of AMC's biggest historical draws has been movies. However, their performance has been trumped by other DISH movie offerings, including the many thousands of titles available on Blockbuster @Home and from top-quality providers such as HBO, Showtime, Starz, EPIX, MGM HD, IndiePlex, and RetroPlex," Shull said.

Beginning Saturday, HDNet Movies will be available on Channel 130, Style will be on Channel 128, and HDNet (soon to become a new entertainment and music channel called "AXS.TV") will run on Channel 131.

Dish Breaks Bad on its Viewers; Drops AMC Networks due to Unrelated Lawsuit
AMC NETWORKS CONTINUES NEGOTIATIONS WITH AT&T
New York, NY (July 1, 2012) - AMC Networks, Inc. (Nasdaq: AMCX), the parent company of AMC, IFC, Sundance Channel and WE tv, today offered the following statement regarding DISH and AT&T:
"DISH claims to put its customers first yet they've taken away DISH viewers' favorite scripted drama series, AMC's "The Walking Dead."* DISH dropped our networks not because of ratings or rates. In fact, DISH has not discussed rates with us at all. DISH customers have lost some of their favorite shows because of an unrelated lawsuit which has nothing at all to do with our programming. DISH customers will not be able to watch the new season of AMC's "Breaking Bad," premiering July 15, or upcoming seasons of "The Walking Dead," "Mad Men," or any of our other popular shows. We urge DISH customers who want to have access to our programming to call 1-855-KEEP-AMC or visit www.keepamc.com.
In a distinctly different matter, we are in ongoing discussions with AT&T about a new agreement and will update our viewers as soon as possible."
AMC Networks noted that it is in negotiations to renew a carriage agreement with AT&T that expired at midnight eastern time on June 30, 2012.
*Source: Nielsen Media Research 4Q11-1Q12 A18-49 (000) Dish Universe
(AMCs The Walking Dead currently ranks as the highest-rated scripted drama series in basic cable history.)

In this article: amc, amc networks, AmcNetworks, att, axs tv, AxsTv, breaking bad, BreakingBad, carriage, carriage dispute, CarriageDispute, channel, dish, dish network, DishNetwork, hdnet, hdpostcross, hdpostmini, ifc, mad men, MadMen, minipost, u-verse, we, womens entertainment, WomensEntertainment
All products recommended by Engadget are selected by our editorial team, independent of our parent company. Some of our stories include affiliate links. If you buy something through one of these links, we may earn an affiliate commission.
Share
Tweet
Share