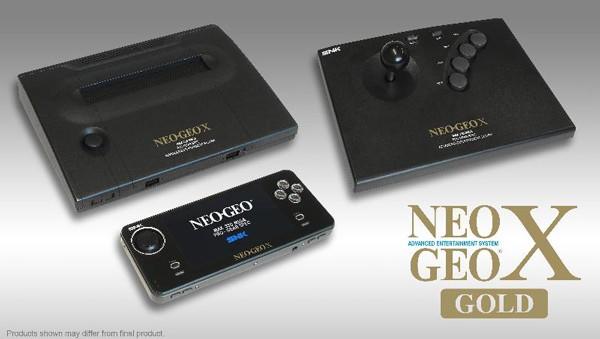 Just when you were wondering if it was all just vaporware, the Neo Geo X has finally received a worldwide release date of December 6th after missing its original Q2 window. The 20th anniversary reboot of the retro gaming system -- now branded the Neo Geo X Gold -- has a suggested retail price of a cent under $200, and for that you get the handheld and the newly detailed peripherals shown above -- a joystick and a charging dock that doubles as TV out (via HDMI or RCA). The specs have changed somewhat since the initial announcement and the handheld is now showing off a 4.3-inch LCD, a little bigger than the 3.5-inch previously announced, while the list of pre-installed titles looks just as healthy as it originally did -- see the source link for the full list.

"Great game consoles don't die; they're just reborn in much more affordable and convenient packages," said Tommo CEO Jonathan Wan. "The NEOGEO X GOLD is a love letter to one of my favorite consoles of all time, and working with SNK PLAYMORE to acquire the NEOGEO license, Tommo Inc. looks to provide gaming and entertainment enthusiasts with a classic arcade experience both at home and on the go."

For the latest news as it is released, and for additional information regarding the NEOGEO X GOLD entertainment system, please visit: www.NEOGEOX.com.

In this article: games, hand held, HandHeld, hdmi, NEO GEO, neo geo portable, neo geo X, neo geo x gold, NeoGeo, NeoGeoPortable, NeoGeoX, NeoGeoXGold, retro, SNK, SNK Playmore, SnkPlaymore, Tommo
All products recommended by Engadget are selected by our editorial team, independent of our parent company. Some of our stories include affiliate links. If you buy something through one of these links, we may earn an affiliate commission.
Share
Tweet
Share