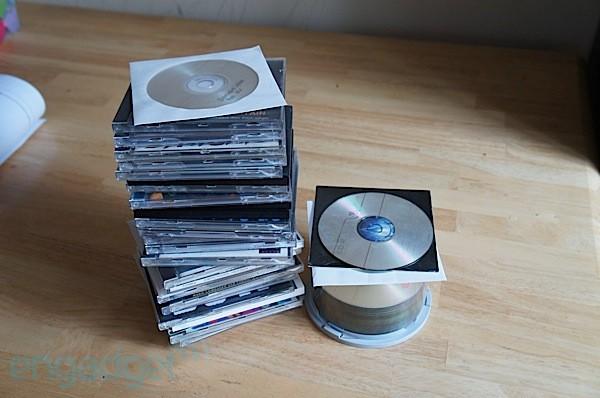 Back in our day, we used to listen to music on shiny plastic discs with lasers, not any of your new-fangled Zunes and what not. That was back when bands had sensible names, like the Dave Clark Five. These days, however, CDs and DVDs are remnants of a simpler time, a time before these kids were playing their Lady Gagas on their Rio Carbons. Fujitsu will be putting those outdated media formats to work again, with a recycling program that uses the material to build shiny new notebooks, starting with the Lifebook P772/E enterprise laptop, with more models to follow. According to the company, the new program is set to reduce the use of new plastic by 10 tons a year and slice C02 emissions by around 15 percent. More information on the program can be found after the break. Now please get off our lawn.

Fujitsu Limited and Fujitsu Laboratories Limited today announced the development of the PC industry's first recycling system that collects used CDs and DVDs at Fujitsu Group recycling centers and reuses the plastic in the bodies of notebook PCs. Fujitsu began using this recycled plastic for part of the front panel of its LIFEBOOK P772/E notebook PC for enterprise customers, a model in its summer 2012 lineup.

To avoid the risk of contaminants being mixed into the recycled plastic, the new recycling system performs quality control based on a chemical substances risk management database developed by Fujitsu Laboratories, thereby ensuring that notebook PCs and other ICT devices comply with legal requirements for chemical components. Compared to conventional notebook PC manufacturing processes, this system is expected to reduce the amount of newly produced plastic used by 10 tons per year while cutting CO2 emissions by approximately 15%.

Going forward, Fujitsu plans to expand the use of this system to other notebook PCs and products as a way to reduce its environmental footprint and resource consumption. The Fujitsu Group is proud to promote the recycling of end-of-life ICT products in Japan and around the world to help create a recycling-minded society.

At the company's five recycling centers across Japan, Fujitsu collects, disassembles, sorts, and recycles personal computers and other products. However, reusing the recovered plastic in new computer units had posed a number of challenges. Firstly, when different types of plastic are involved, a uniform mixture is impossible to achieve even by melting the plastic with heat. As a result, it is necessary to collect only a single type of plastic to ensure the desired material properties. Even so, in a given plastic, there may be differences in ingredients, visual defects, or impurities that make it difficult to achieve the same molding characteristics, colors, strength and other properties as conventional plastics. Furthermore, compliance with the RoHS directive(1) and REACH regulations(2) regarding the safety of chemicals in ICT products has made it challenging to control the quality of recycled plastics, and until now it has been impossible to reuse recovered plastic in a computer bodies.

In this article: cd, dvd, fujitsu, laptop, laptops, notebook, recycle, recycling
All products recommended by Engadget are selected by our editorial team, independent of our parent company. Some of our stories include affiliate links. If you buy something through one of these links, we may earn an affiliate commission.
Share
Tweet
Share