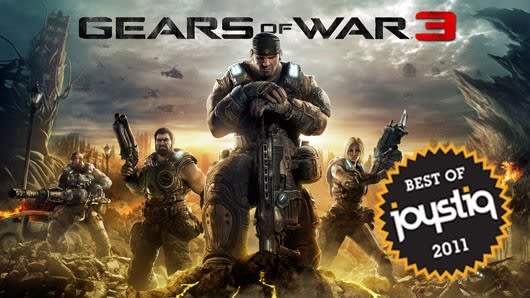 If my life were a book, the chapter covering the last quarter of 2011 would be one page long and contain one phrase, in bold: Gears of War 3. In reality, lots of things happened to me over the last couple months, but aside from a brief affair with Skyrim, most of my time was spent going to farmers markets and crafts fairs with Gears of War 3. You know, committed relationship couple-type stuff.

I've always been a fan of the series -- the multiplayer side in particular -- and my excitement for another Gears of War, especially following a successful beta, was at an all-time high. With dedicated servers, updated weekly playlists and a variety of new modes, including a much-improved Horde mode, Gears of War 3 came equipped with more replay value than any of its predecessors.

But it isn't just about the multiplayer. The single-player campaign, the biggest Epic has ever produced, didn't disappoint. Gears of War 3 traded awful worm surgery for intense firefights and explosions. Each moment of the campaign seemed hell-bent on usurping the one that came before, ultimately creating an experience that can be considered Epic's finest offering to date.

Pacing is another crucial lesson Epic learned and exercised in Gears of War 3. The gameplay never got stagnant -- brief exchanges between the main characters and a few cutscenes propelled the story, as has become the norm for the series, but the gameplay kept a consistent and engaging clip. Skirmishes flowed into larger battles; the scale of conflict and added variety of enemies made each encounter fresh. Gears of War 3 never tried to impress by showing something spectacular. It impressed by making you play through spectacular scenarios.

If Halo: Reach was Bungie's swan song to the Halo franchise, Gears of War 3 is Epic's dissertation paper. It's an exhausting report of the successes Epic has learned, one that's helped Gears of War 3 stand tall amongst the finest shooters in this generation.

Joystiq is revealing its 10 favorite games of 2011 throughout the week. Keep reading for more top selections and every writer's personal, impassioned picks in Best of the Rest roundups. The list so far:
In this article: Epic, epic-games, Gears-of-War-3, joystiq-best-of-2011, microsoft, xbox
All products recommended by Engadget are selected by our editorial team, independent of our parent company. Some of our stories include affiliate links. If you buy something through one of these links, we may earn an affiliate commission.
Share
Tweet
Share