SpareOne: a cellphone that can run for 15 years 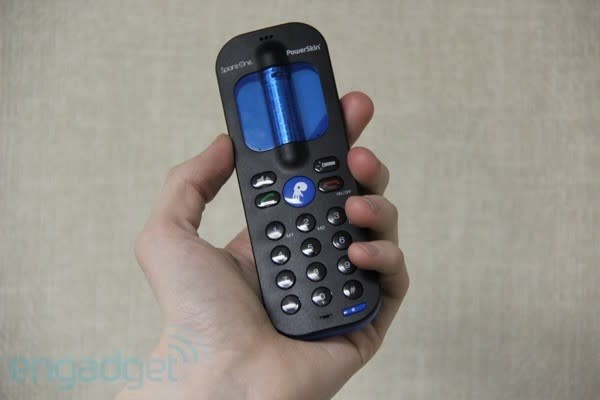 Xpal Power (owners partners of Energizer and PowerSkin) has leveraged its battery-tech know-how into the SpareOne, a cellphone that can maintain its charge for up to 15 years on just a single AA battery. It's designed to be used for sponsorship, hotel use and (most importantly) emergencies, to throw into your trunk and forget about until you need to contact roadside assistance. Now at CES we've had a chance to get our mitts on the device to see what it's like in the flesh plastic. If you're just a little bit curious, why not join us for a short trip?


We took this device back to the Engadget trailer at CES and every single member of staff played with it, fascinated by the concept. It looks like your average cheap cellphone, except where the screen would sit is a transparent plastic void where a prominently branded battery sits instead. It's surprisingly solid and well put-together, opening the battery compartment reveals a sizable capacitor -- which is what we think is the real hero behind its purportedly long life. Because of the stripped down nature of the phone, we weren't able to understand why it wasn't initially making calls. The two flashing LEDs indicate battery life and signal strength, but that's all the phone's gonna let you know.

Call quality was basic and loud (like a phone from a decade ago), which sounds harsh to our ears, which have been cosseted by years of noise-canceling microphones. The only thing we weren't able to judge was its USP: the length of its battery life is something we'll have to address in a few year's time, assuming the world hasn't ended before then. But here's the kicker -- judging the phone on its merits today, would you buy one of these over a cheaper Nokia C1 (or the admittedly rare Motofone F3?). We'd be a little more confident about the phone if the warranty of the device was longer than a year, you know? Still, we'd feel reasonably comfortable keeping one of these in the first aid kit for when the Robopocalypse hits, hoping that we'd never really need to use it. It'll be available at some point this quarter, will take any GSM SIM or microSIM (it has an adapter) and cost $50.
In this article: AA Battery, AaBattery, Battery, Battery Life, BatteryLife, CES, CES 2012, Ces2012, Energizer, hands-on, mobilepostcross, PowerSkin, SpareOne, video, XPal Power, Xpal Power Spare One, XpalPower, XpalPowerSpareOne
All products recommended by Engadget are selected by our editorial team, independent of our parent company. Some of our stories include affiliate links. If you buy something through one of these links, we may earn an affiliate commission.