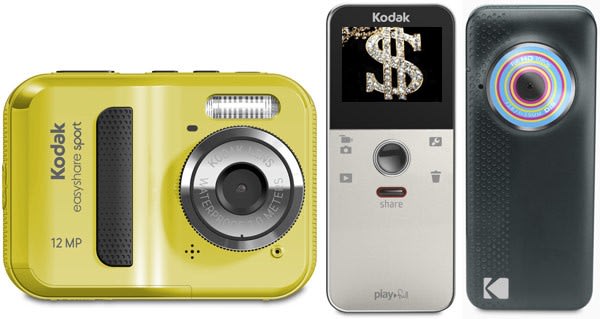 Kodak's been in a bit of a financial bind lately, and has been exploring various options to maximize profitability and get its balance sheet back in the black. After recently filing actions against Apple and HTC in the International Trade Commission, Kodak's legal team now has Samsung in its sights. According to a press release, Kodak has filed a federal suit in the Western District of New York alleging that several Sammy slates are infringing five of Kodak's digital imaging patents. The patents in question claim various image capture and transmission technologies, from taking and sending images via email to transferring digital pictures over a cellular network. We haven't gotten a peek at the complaint just yet to see which devices allegedly run afoul of Kodak's IP, but you can find the five patents in question in the PR after the break.
Show full PR text
Kodak Alleges Patent Infringement Against Samsung

Kodak has licensed its digital imaging patents to more than 30 leading technology companies, including LG, Motorola, and Nokia, with all of the licenses royalty-bearing to Kodak.

The complaint against Samsung alleges infringement of the following five patents:

U.S. Patent No. 7,210,161 – "Automatically Transmitting Images from an Electronic Camera to a Service Provider Using a Network Configuration File"

U.S. Patent No. 7,936,391 – "Digital Camera with Communications Interface for Selectively Transmitting Images over a Cellular Phone Network and a Wireless LAN Network to a Destination"
Via: Forbes
In this article: digital images, digital imaging, DigitalImages, DigitalImaging, intellectual property, IntellectualProperty, ip, kodak, lawsuit, legal, litigation, patent, patents, samsung
All products recommended by Engadget are selected by our editorial team, independent of our parent company. Some of our stories include affiliate links. If you buy something through one of these links, we may earn an affiliate commission.
Share
Tweet
Share
Save