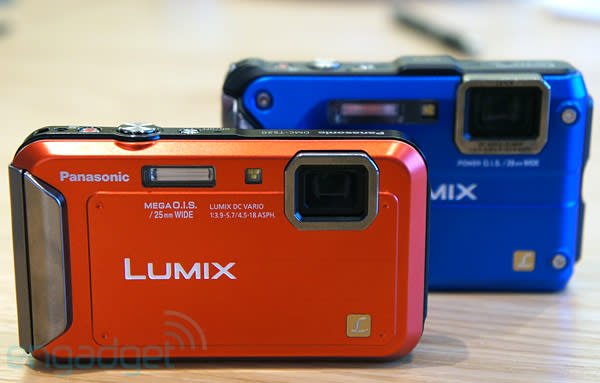 Panasonic has helped lead the market for ruggedized cameras, which have been a hit among adventurous photographers for years, and now the company has two new additions to add to its water/shock/freeze/dustproof cam line. Described as "the optical outdoor companion," the Lumix DMC-TS4 is Panasonic's new ruggedized flagship, replacing the TS3 and packing a 12.1 megapixel CCD sensor, 1080/60i HD video capture, a 4.6x 28-128mm optical zoom lens and 2.7-inch LCD. Naturally, it can withstand just about everything you'll throw its way, considering that it's waterproof to depths of 40 feet, shockproof to 6.6 feet and freezeproof to temps as low as 14 degrees Fahrenheit. The TS4 also includes GPS, compass, altimeter and barometer functionality, logging all this data to supplement your photos with a full weather and location readout. Panasonic has also added full manual control, letting you adjust both aperture and shutter speed when shooting in manual mode.

The TS4 may offer a respectable spec list, but it doesn't come cheap. The TS20 is an attractive alliterative, however, with a slim profile, 16.1 megapixel sensor, 720p HD shooting, a 4x 25-100mm optically stabilized zoom lens and a 2.7-inch LCD. It's waterproof to 16 feet, freezeproof to 14 degrees Fahrenheit and can survive drops from up to five feet. There's no manual option on this lower-end model, but it does include Panasonic's Intelligent Auto mode for more accurate shooting. The TS20 will ship in late-February in orange, blue, black and red for $180, while the flagship TS4 will be available in orange, blue, black and silver for $400 when it ships in mid-March. You'll find both press releases after the break.

The LUMIX TS4, the Optimal Outdoor Companion, Combines a GPS, Compass, Altimeter, Barometer with Waterproof*2, Shockproof*3 and Freezeproof Features, Allowing it to Excel in Photo and Video Capture Under Many Conditions

SECAUCUS, NJ (January 31, 2012) – Panasonic today announced the LUMIX DMC-TS4, the company's top-of-the-line rugged digital camera with features such as a built-in GPS*1 system, compass, altimeter, barometer, plus outstanding toughness, including: waterproof*2 to approximately 40 feet (12 meters), shockproof*3 to approximately 6.6 feet (2 meters), freezeproof to temperatures as low as 14ºF, and dustproof*2. Beyond its rugged design, the LUMIX TS4 also excels in photo and video quality, offering the best of both worlds with a LEICA DC VARIO-ELMAR lens with a 4.6x optical zoom (35mm equivalent: 28-128mm), a 12.1-megapixel Hi-Speed CCD sensor and the advanced image processing LSI Venus Engine, and the ability to shoot 1,920 x 1,080 full-High Definition (HD) video in AVCHD and MP4 formats.

"The LUMIX TS4 is the latest addition to our successful line of rugged digital cameras, which offer users the freedom to take high-quality photos and video under a variety of conditions thanks to a design that is waterproof, dustproof, shockproof and freezeproof. Plus, with added GPS and compass capabilities, the TS4 is the perfect travel companion," said David Briganti, Senior Product Manager, Imaging, Panasonic Consumer Marketing Company of North America. "Beyond its top-of-the-line rugged features, the LUMIX TS4 captures exceptional photos and videos, also making it the ideal "worry-free" everyday digital camera for those life mishaps, like an accidental drop or a spilled drink."

The LUMIX TS4 is ideal for active outdoor use and the altimeter works as an indicator for depth underwater. The barometer log is available to help users forecast the climate and then log the barometric trends. The altitude measurements can be improved when using the camera's GPS data, which is enhanced when compared to its predecessor, the LUMIX DMC-TS3. The new GPS system has more than a million landmarks and 82 countries/regions covered in the maps available on the bundled DVD. Geo-tagged images are automatically sorted and can be played back along a map so that users can literally trace their photographic journey. The LUMIX TS4 shows the name of the Country/Region, State/Prov./County, County/Township, City/Town/Village and Landmark – all which is saved in the EXIF data.

Thanks to its high-speed, large-capacity signal processing Venus Engine, the LUMIX TS4 is not just rugged on the outside, but powerful from within as well. The Venus Engine integrates advanced signal processing capabilities to power Intelligent Noise Reduction, thus producing stunning still photos and videos. In addition, the Venus Engine powers high-speed burst shooting and super-fast response times, with Sonic Speed AF, allowing the user to catch those spur-of-the-moment memories.

New to the LUMIX TS-Series, the LUMIX TS4 offers users manual operation, allowing adjustment of shutter speed and aperture for more creative photography. Plus, with modes such as Time Lapse Shot, Miniature Effect, and Panorama Shot – photography is even more fun. With the Time Lapse Shot, once the start time, interval and the number of photos to shoot are set, the camera automatically records the images based on the settings and the LUMIX TS4 can be left to record stationary subjects, such as flowers coming into bloom, clouds, or an animal. Once the data is captured, during playback the footage is condensed to give a unique sense of time. The Miniature Effect mode, in which the peripheries are defocused while saturation and contrast is emphasized, makes the photo look like a diorama. For videos recorded in this mode*4, playback is 10x fast forward, making it comical and amusing to watch. Panorama Shot makes it is possible to shoot a maximum 360-degree of horizontal / vertical panoramic image by taking consecutive shots and overlaying the photos.

For those who are looking for an intuitive shooting option, the LUMIX TS4 includes Panasonic's popular iA (Intelligent Auto) mode – a suite of technologies that are automatically engaged to allow the camera to select the most appropriate settings to take high-quality photos and videos.
Plus, a dedicated video record lets the user instantly start recording videos while shooting photos without having to go through any additional menu options.

SECAUCUS, NJ (January 31, 2012) – Panasonic today announced the Panasonic LUMIX TS20 digital camera, which features a rugged design allowing for it to be waterproof*1 to approximately 16 feet (5 meters), shockproof*2 to approximately 5 feet (1.5 meters), dustproof*1 and freezeproof to temperatures as low as 14ºF. The LUMIX TS20 (16.1-megapixel) features a flat and slim profile with a 25mm ultra-wide-angle lens and a 4x optical zoom (35mm equivalent: 25-100mm). Even more, the LUMIX TS20's zoom extends to 8x equivalent with the Intelligent Zoom function, made possible by Panasonic's Intelligent Resolution technology.

The LUMIX TS20 can shoot 720p High Definition video in the MP4 format and the 4x optical zoom is available during video recording – making this digital camera a highly-capable model for shooting video. Plus, with a dedicated video record button, switching between still photos and videos is quick and seamless. The new LUMIX TS20 records dynamic HD video in 1280 x 720p at a smooth 30p MP4 format, which makes it easy for editing or sharing the videos. The recorded videos can be also directly uploaded to YouTube when the included software is installed. The LUMIX TS20 also features a 2.7-inch Intelligent LCD with High Angle mode.

"The Panasonic LUMIX TS20 is an affordable rugged digital camera ideal for any user who is looking for a slim, durable digital camera that can take high quality photos and HD videos in a variety of situations, such as at a beach, hiking, snowboarding and more," said David Briganti, Senior Product Manager, Imaging, Panasonic Consumer Marketing Company of North America. "Thanks to its waterproof, shockproof and dustproof features, the TS20 is capable of capturing photos and videos that not many digital cameras can, and with iA, it's also incredibly easy and intuitive to use."

In addition to being easy to use, The LUMIX TS20 also includes features that increase the photographic fun and creativity of the user. The Miniature Effect mode, in which the peripheries are defocused while saturation and contrast is emphasized, makes the photo look like a diorama. For videos recorded in this mode*3 3 playback is 10x fast forward, making it comical and amusing to watch. Panorama Shot makes it is possible to shoot a maximum 360-degree of horizontal / vertical panoramic image by taking consecutive shots and overlaying the photos.