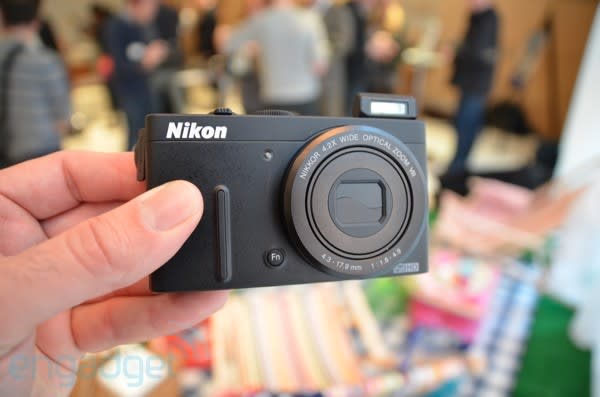 Of all the new Nikons announced today, the P310 is likely to be one of the most popular. Its 4.2x (24-100mm) focal length may not deliver the big bad zoom of the P510, and it can't do RAW like the P7100, but it compensates with some serious optical features instead. Among them is improved image stabilization, which Nikon says will let you take blur-free handheld shots at four stops below what would otherwise be possible. There's also a "market leading" f/1.8 maximum aperture, which further aid low-light shooting as well shallow depth-of-field shots. Finally, the form factor is really important. This camera is a lot smaller than either the P510 or the P7100 and it feels great in the hand: not quite pocketable, perhaps, but certainly portable, discreet and sturdy. We only had access to a very early pre-production sample, so we couldn't check out the menu system or take shots, but we gave the camera a good looking over in the hands-on video after the break, where you'll find some more initial impressions too.


Another important addition to the P310 is the function button on the right-hand side of the lens, which we're told will work like an assignable hot-key, giving quick access to your choice of setting. For example, if you expect that a shot is going to demand quick ISO adjustment, you'll be able to assign that to the function key -- a feature that should go some way to making up for the relatively minimal (e.g. compared to the P7100) controls on the back.

As we said, there's no RAW, and there's also no hot-shoe on this small form factor, so there could be some tough decisions in picking the P310 over a more expensive and fully-featured model. It should also be said that the sensor size is underwhelming: just 1/2.3-inches, which is significantly smaller than, say, a Canon S100 or S95, and means those 16 million pixels will be seriously crowded. When quizzed over this, our contact at Nikon re-iterated that the back-lit CMOS and other low-light features make up for this. While we're not making any specific judgement prior to review time, it's not controversial to suggest that Nikon generally needs to up its game when it comes to sensor size.

The P310 will land on British shelves on March 22nd priced at £299, but if you're in the US then lucky you -- the $330 price tag there defies all currency conversions. We only played with the black model, which had a nice matte finish on the metal body, but watch out for a white variant too.

Mat Smith contributed to this report.
In this article: compact, coolpix p310, CoolpixP310, f1.8, hands-on, low-light, nikon, nikon coolpix, nikon coolpix p310, nikon p310, NikonCoolpix, NikonCoolpixP310, NikonP310, p310, video
All products recommended by Engadget are selected by our editorial team, independent of our parent company. Some of our stories include affiliate links. If you buy something through one of these links, we may earn an affiliate commission.
Share
Tweet
Share