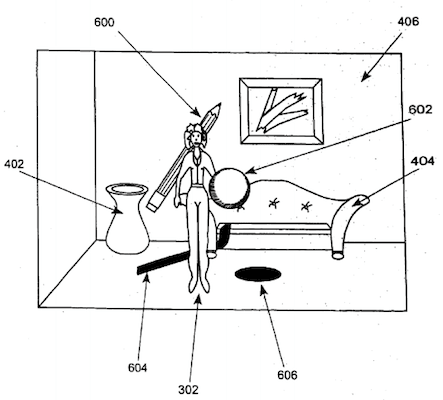 We're not suggesting Sony has a Kinect style controller coming soon, but it certainly filed a patent for one. The application for a "User-Driven Three-Dimensional Interactive Gaming Environment" was initially logged in October last year by Richard Marks of PlayStation Eye fame. The controller can "determine when to interact with the system by allowing part of the user's body, or an object, to cross the maximum depth range plane" meaning input could be limited to just the hands etc. This wouldn't be the first time Sony has created controller technology similar to its competitors, but the company is careful not to outright state that's what it's for. That said, amongst the legalese it does go as far too say the system can be implemented by an entertainment system "such as" its flagship console. So, sadly there's no way of knowing if we'll be getting a PlayStation Motion any time soon, but feel free to wave over the source link to see the patent for yourself.
Via: Eurogamer
Source: USPTO
In this article: 3D, gaming, kinect, motion controller, motion detection, Motion sensing, MotionController, MotionDetection, MotionSensing, object recognition, ObjectRecognition, patent, patent application, PatentApplication, playstation, playstation move, PlaystationMove, sony, sony playstation, SonyPlaystation
All products recommended by Engadget are selected by our editorial team, independent of our parent company. Some of our stories include affiliate links. If you buy something through one of these links, we may earn an affiliate commission.
Share
Tweet
Share
Save