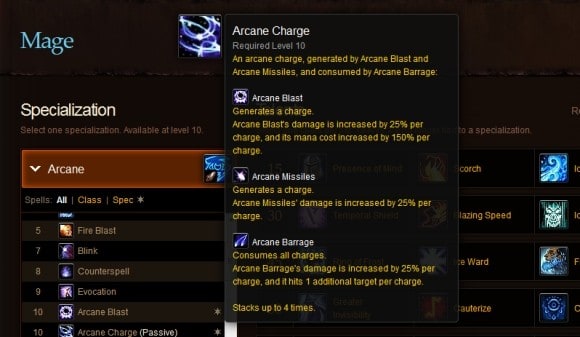 Every week, WoW Insider brings you Arcane Brilliance for arcane, fire and frost mages. This week, we finish what we started in our last cloumn, which will involve wild speculation, irresponsible levels of optimism, and a giddy and in all likelihood unwarranted sense of unchecked excitement about tooltips.

If you missed part one, what were you thinking? We talked about the updated Mists of Pandaria talents and even made some disparaging comments about warlocks. It was super fun -- you should go check it out. But hurry up about it.

Because we have new spells to discuss.

Like that one up there in the picture. It's rad.

This is a brand new spell, and it's by far the single biggest game-changer for arcane mages in the new calculator. You pick it up if you spec arcane at level 10, alongside good old Arcane Blast, and it changes how that spell works, along with every other major arcane nuke.

The first real change is in how this spell affects and is affected by Arcane Missiles. Arcane Missiles is a spell without a real purpose right now. But in Mists of Pandaria, it looks like the spell will be reintegrated into our rotations as a full-fledged second button to push. The spell will still be a channeled proc from your other damage spells, but now, it's a proc you might actually look forward to getting. Why? The answer is twofold:

This makes it an absolutely invaluable part of the rotation. It will be a proc you want to hit every time it pops -- a powerful damage spell, and a way to ease the strain on your mana pool during every phase of the battle.

And Arcane Barrage is basically reborn with this expansion. It serves several purposes, the first of which is still mobility damage. It will also serve as the release valve for your Arcane Charge stack, as casting it will consume all charges. It still benefits from the buff, though, and in a truly fantastic way.

Arcane Barrage gets the 25% stacking damage buff, but each charge also allows it to strike an additional target. That means that at full stack, you get a spell that resets the stacking buff, can be cast instantly and on the move, hits for a bundle of extra damage, and streaks out like the wrath of an angry arcane god at five enemies. That's a lot of awesomesauce packed into one very tasty-sounding spell.

So playing an arcane mage will no longer be anything even remotely resembling one-button proposition. Arcane Blast spam appears to be a thing of the past. Will it still be the backbone of our rotations? Yes, but now you'll also be weaving in Arcane Missiles whenever you can and looking for the perfect opportunities to reset your stack with what may potentially be the single best-looking spell in the game. I mean, Arcane Barrage is already unreasonably pretty. Close your eyes and picture that sparkly ball of kickass as it appears in the game right now.

Now imagine there are five of those.

With Hot Streak gone from the game, its effect is essentially being rolled into Pyroblast itself. You'll still get to hurl a giant flaming boulder at any warlock you see, but now the spell itself comes with an undefined chance to be instant and mana-free. This will proc off of all your direct damage spells, and I imagine it'll trigger at a similar rate to the way Hot Streak operates now.

At level 24, all fire mages will get Critical Mass, which is a passive buff to the crit chance of Fireball, Frostfire Bolt, Pyroblast, and Scorch. It will multiply your chances to crit with all of those spells by 1.3. So it's a boring, passive buff that might as well be folded into the tooltips for each of those spells, which is exactly the sort of spell I thought we were trying to do away with in this expansion.

Inferno Blast has changed since its previous iteration, too. It is still a souped-up version of Fire Blast, what with the instant cast and instant damage and the spreading of DoT effects and whatnot. It now spreads Combustion, Ignite, Pyroblast, and Flamestrike DoTs to up to five additional targets. It also still provides the 10% chance your other damage spells will cause your next Inferno Blast to apply a 2-second stun to your target.

And yes, you read that right, Flamestrike is back as a baseline spell for all specs at level 70. We were wondering where it went, and apparently it was right there all along in front of our eyes, just like Rachel Leigh Cook in glasses. All hot and sexy and we never noticed until she took those glasses off and put on a dress.

Finally, Combustion appears to be undergoing some tweaks. You will no longer be able to cast it on anything not already affected by at least one of your other DoT effects active on that target. The cooldown is staying at 45 seconds, but apparently Living Bomb will no longer have anything at all to do with Combustion. It won't add to Combustion's damage, it won't answer any of Combustion's texts, and it certainly won't cosign on Combustion's new apartment.

Frost only has a couple of tweaks to mention, one to Fingers of Frost and one to Brain Freeze.

The changed elements to Fingers of Frost include that it now has a different chance to proc from Frostbolt (20%) than it does from Frozen Orb (50%), any freezing effects that fail due to target immunity will now automatically grant you a charge, and you can now stack charges up to three instead of two.

Brain Freeze is still Brain Freeze, but now it only procs from your talented bomb spells. That means whichever talent you choose at level 75, whether it be Arcane Bomb, Frost Bomb, or Living Bomb, will be your only means of triggering Brain Freeze, which you'll pick up two levels later at level 77. We'll have to wait and see how big that proc chance ends up being before we know whether or not Brain Freeze will still manage to be a relevant part of our rotations.

Other general spell changes include:
So our armor spells will basically function as switchable stances, each providing a different kind of damage buff and a questionable amount of defensive functionality for a spell with the word armor in the name. In other news, Shatter is even shatter-ier, and Arcane Brilliance is slightly less brilliant.

I'm out of space, but what do we think, mages?