NYC phone booths to get second lives as slate stalls 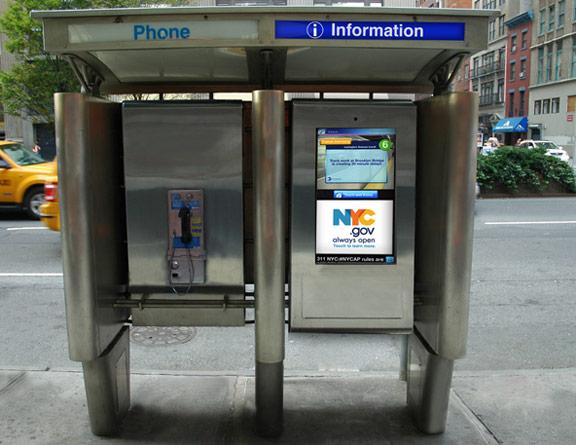 Believe it or not, but there are still hundreds, nay, thousands of phone booths out there on the streets of New York City. Obviously, in the age of the ubiquitous smartphone, most of them go untouched -- though, usually that has more to do with some mysterious substance covering the handset. The city is preparing to update this urban staple by replacing the touch tone quarter eaters with 32-inch touchscreens. The giant slates will offer a quick connection to 311 for requesting info and filing complaints, as well as interactive guides to the neighborhood. Instead of being a place to prank call 1-800 numbers, the phone booth will now become your one stop shop for restaurant suggestions and local landmark locations. 250 of the devices are being provided free of charge by City24x7 for a pilot program and, if all goes well, the company and the city will split revenue generate from ad sales following an expanded roll out. You can bet we'll be some of the first people on the street to put these through their paces when they make their expected debut in May.
In this article: city24x7, government, new york, new york city, NewYork, NewYorkCity, ny, nyc, pay phone, pay phones, PayPhone, PayPhones, phone booth, phone booths, PhoneBooth, PhoneBooths, tablet, tablets
All products recommended by Engadget are selected by our editorial team, independent of our parent company. Some of our stories include affiliate links. If you buy something through one of these links, we may earn an affiliate commission.