iPad inside, but what was going on outside? 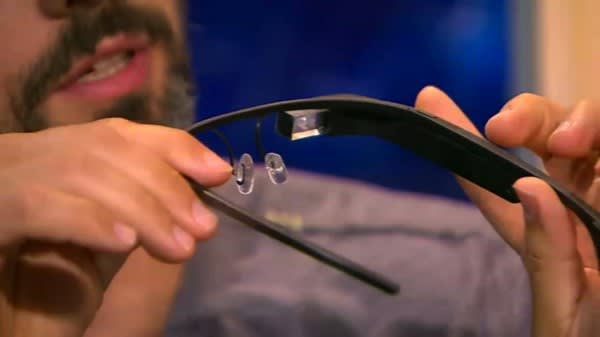 Sergey Brin has appeared on The Gavin Newsom Show on Current TV to drop a few more enticing hints about Project Glass. While showing the presenter a picture he'd taken with the AR glasses, he revealed that the prototype is controlled with a trackpad running down the right* arm. He also talked about the device's genesis in Goggle's (pun intended) X Lab, which he described as an "advanced skunkworks" where "far-out projects" are developed -- it's also the department that occupies most of his time. While the units he and his colleagues have been wearing are very rough prototypes, the Google co-founder shared his private hope that the tech will make its way to general release next year. You can catch the extract in full in the video after the break.

*Right for the wearer, left for the observer. It depends entirely on your perspective.

Via: Ubergizmo
Source: Current TV
In this article: Current TV, CurrentTv, Gavin Newsom, GavinNewsom, Google Glasses, Google X, Google X Lab, GoogleGlasses, GoogleX, GoogleXLab, Project Glass, Project X, ProjectGlass, ProjectX, Sergey Brin, SergeyBrin, Skunkworks, The Gavin Newsom Show, TheGavinNewsomShow, Trackpad, video, X Lab, XLab
All products recommended by Engadget are selected by our editorial team, independent of our parent company. Some of our stories include affiliate links. If you buy something through one of these links, we may earn an affiliate commission.