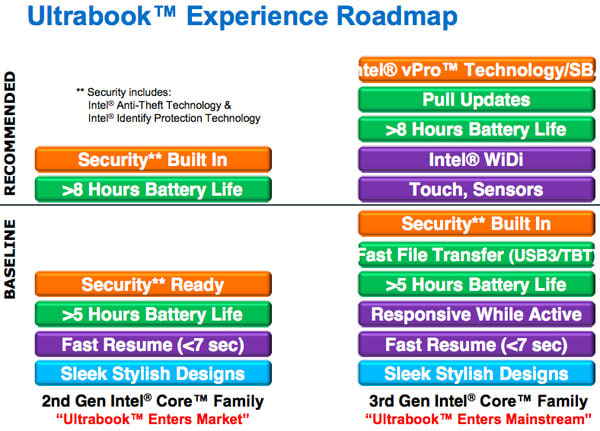 When Intel first unveiled its grand plans for Ultrabooks at last year's Computex, many of the fireworks were consciously reserved for Ivy Bridge-based variants in 2012 -- well, they're here. This year's show in Taipei will show off the third generation of the skinny, MacBook Air-inspired platform, and Intel is toughening up the design requirements in the process. The thickness requirements are the same as last year, at 18mm for systems with screens under 14 inches and 21mm for bigger machines, but high-speed ports are now mandatory to get that coveted "Ultrabook" label and the full marketing weight of Intel's $300 million Ultrabook Fund: if a PC doesn't have either USB 3.0 or Thunderbolt, it's out of the running. Intel also wants security built-in, rather than optional, as well as guarantees that a system is quick and responsive when it's fully awake. Not that this would be terribly hard with the low-voltage Ivy Bridge processors launching at the same time, mind you.

Just to reinforce the importance of it all, Intel is noting that the flood of Ultrabooks is about to pick up in a big way as the category hits the mainstream. We were promised 75 Ivy Bridge Ultrabooks this year in a presentation back at CES; that number's now up to 110, 30 of which will be Windows 8-friendly touchscreen models and another 10 opting for the convertible tablet route. At least some of those lightweight portables should pop up at Computex next week, and you can be sure we'll be investigating as many of them as we can to see just how well Intel's partners have advanced the game.