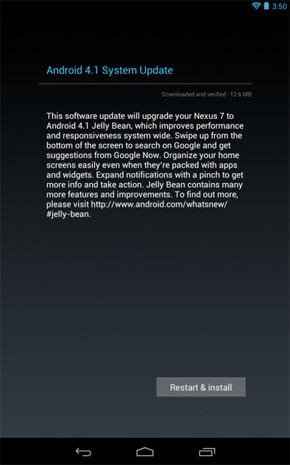 Android 4.1.1 just made itself available on the AOSP servers yesterday, and evidently it's wasting no time in heading towards the world's first Jelly Bean tablet. The ASUS-built Nexus 7 is now receiving the update -- a 12.6MB download that boosts the version number to 4.1.1. Our in-house unit isn't pulling down the new edition just yet (nor is our Galaxy Nexus), so it seems to be one of Google's typical phased releases. At any rate, Android Central is reporting that the code "improves performance and responsiveness system wide," while also adding Google Wallet to your app library. Seeing anything else? Let us know in comments below!

Via: Droid-Life, Android Central
Source: Google Developers (1), (2)
In this article: android, android 4.1, android 4.1.1, android jelly bean, Android4.1, Android4.1.1, AndroidJellyBean, asus, google, google android, GoogleAndroid, jelly bean, JellyBean, nexus, nexus 7, Nexus7, slate, software, tablet, update
All products recommended by Engadget are selected by our editorial team, independent of our parent company. Some of our stories include affiliate links. If you buy something through one of these links, we may earn an affiliate commission.
Share
Tweet
Share